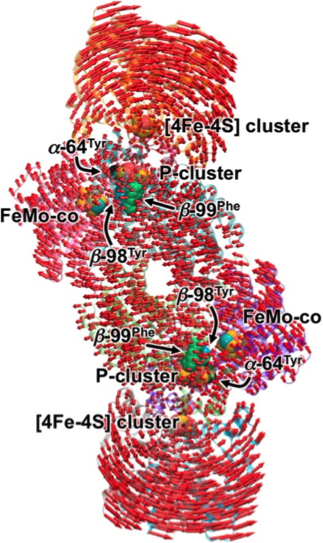 Scientists at the US Department of Energy’s Pacific Northwest National Laboratory and three universities have found a new way to accelerate production of ammonia, which is a key compound in fertilisers.

The research team identified that the nitrogenase MoFe enzyme, which produces ammonia without added hydrogen, is being hindered by Fe protein that delivers electrons to the larger enzyme.

The study is designed to show the way enzyme catalyses a reaction without added hydrogen instead using protons and electrons.

Dissociation of Fe protein from the MoFe enzyme is a slowest step process and takes place eight times for each ammonia molecule produced.

Eliminating such rate-limiting steps could provide insights into the nature of the enzyme that can be applied to synthetic catalysts, scientists said.

"The study is designed to show the way enzyme catalyses a reaction without added hydrogen instead using protons and electrons."

As part of the study, the team substituted three amino acids in the MoFe protein to deliver electrons from small molecule electron carriers thereby reducing substrates, including azide to ammonia, hydrazine to ammonia and protons to molecular hydrogen.

Mechanical coupling between the Fe protein movement and the MoFe protein with the amino acids was identified, showing how Fe protein communicates changes within the MoFe that have an impact on intra-molecular electron transfer and substrate reduction.

Scientists said that the Fe protein and MoFe roll across each other to deliver an electron.

The team said: "The protein’s movement as well as that of the enzyme’s pushes the ‘stepping stones’ used by the electrons to travel through the enzyme closer together. The result: faster ammonia production."

The study was led by Dr Lance Seefeldt. It is a collaboration of experts in biology, proteins, computational analysis, biophysics, and catalysis.

Researchers are currently working to evaluate the protein’s influence on electron transfer, to identify mechanisms of electron delivery in a metal-based enzyme.

Image: The rocking motion of the proteins ([4Fe-4S] cluster) is shown on the enzyme with FeMo-co representing the active site. Photo: courtesy of Pacific Northwest National Laboratory.