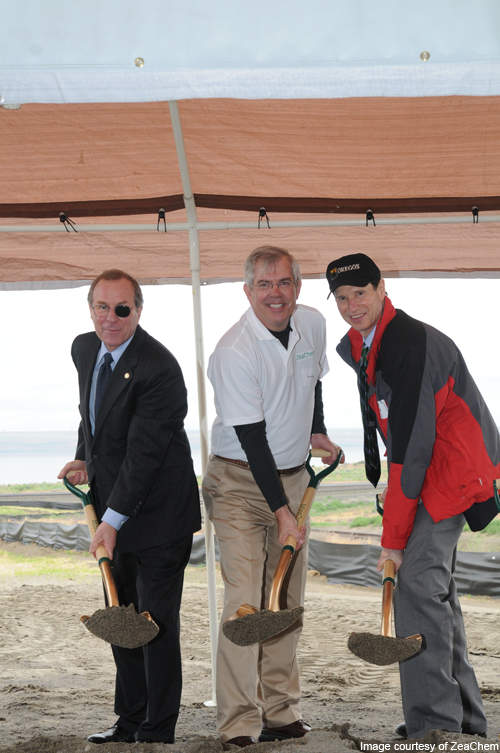 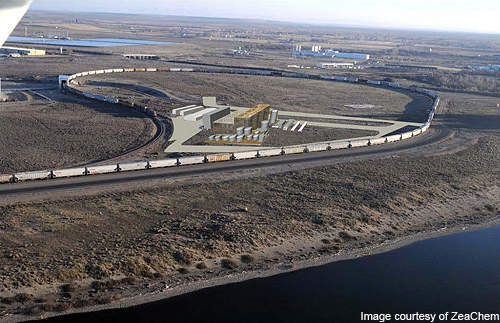 Schematic of the ZeaChem biorefinery. 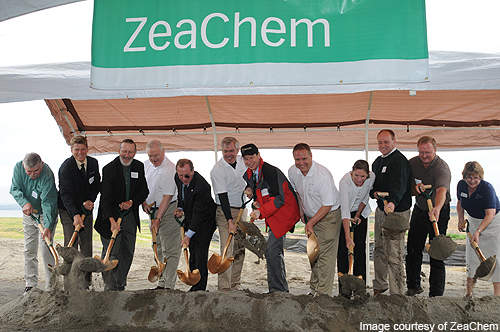 Officials at the ground breaking ceremony of ZeaChem's biorefinery. 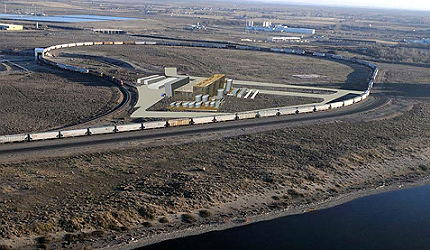 On 2 June 2010, ZeaChem started construction of a biorefinery in Boardman, in the US state of Oregon. It is located at the Port of Morrow in Morrow County and is near to Albus tree farms, which helps in the supply of feedstock.

Construction works were completed in October 2012 and the plant began production in March 2013. The biorefinery has a production capacity of 250,000gal of cellulosic ethanol per annum.

The biorefinery uses third-generation renewable biomass and converts it into sustainable fuel based on patented core technology developed by ZeaChem.

The cellulosic ethanol refinery is expected to generate about 167 jobs in Boardman and 292 jobs in Oregon. The investment for the project was $73m.

US biorefinery design and construction

"The cellulosic ethanol refinery is expected to generate about 167 jobs in Boardman and 292 jobs in Oregon."

ZeaChem started preparation of the site in 2008. The biorefinery includes chemical fractionation and hydrogenation process units for ethanol production.

The construction of a semi-works scale plant, the front-end fermentation part of the biorefinery, was started in November 2009.

The semi-works scale plant has modular building blocks that offer operational flexibility and ready integration with the plant.

Each cargo container-sized block has individual fermentation process units for the production of fermentation bacteria. The units were built by Hazen Research.

In February 2008, ZeaChem signed a long-term agreement with GreenWood Resources (GWR) for the supply of poplar tree feedstock for the biorefinery.

The biorefinery produces cellulosic ethanol using ZeaChem’s patented biorefinery process. Unlike traditional processes, the ZeaChem technology is considered to be more economical and produce a higher yield. The hybrid technology is developed by combining thermochemical and biochemical fermentation processes. On 28 June 2010, third-party vendors confirmed that the ethanol biorefining process developed by ZeaChem is scalable to commercial production.

The ZeaChem biorefining process uses the rigid structural cellulose and lignin compounds from the feedstock. A cellulose carbon chain-digesting bacteria, acetogen, is used to convert biomass sugar molecules into acetic acid in the core facility. The acetogen processing produces 40% more ethanol for a tonne of biomass without any CO2 by-product.

"Construction works were completed in October 2012 and the plant began production in March 2013."

The acetic acid is then converted to ester, which is further reacted with hydrogen to produce ethanol. ZeaChem generates the required hydrogen through gasification of lignin residue to create hydrogen-rich syngas. Hydrogen from syngas is used for ester hydrogenation, while the remaining gas is combusted for producing power and steam for the process.

The process generates about 135gal of ethanol for one bone-dry tonne of feedstock. The process is environmentally efficient and economical compared to conventional cellulosic ethanol processes. The biorefinery’s C2 carbon chain suite of products includes acetic acid and ethyl acetate. The company also develops bio-based chemicals and biofuels, and propionic acid, propanol and propylene.

Contractors and companies involved with the biorefinery

ZeaChem owns and operates the biorefinery. In February 2009, the company awarded an engineering, procurement and construction contract for the biorefinery to CH2M HILL. In December 2010 an EPC contract was awarded to Burns & McDonnell for constructing the core facility of the biorefinery. Other companies involved in the project were Hazen Research, Valero Energy and GreenWood Resources.

ZeaChem received a $25m grant from the US Department of Energy through the 2009 American Recovery and Reinvestment Act. In January of that year the company secured $34m from venture capitalists PrairieGold Venture Partners and Globespan Capital Partners. Follow-on investors include Firelake Capital, Valero Energy Corporation and MDV-Mohr Davidow Ventures.

In January 2012, ZeaChem was selected to receive a $232.5m loan guarantee from the US Department of Agriculture (USDA) for construction of the facility. The loan was awarded as part of the USDA’s 9003 Biorefinery Assistance Program.

In February 2012, ZeaChem entered into contract negotiations with the USDA’s National Institute of Food and Agriculture to receive a $12m grant for development of bio-based products. ZeaChem invested the grant in the Boardman refinery.

Ethanol or ethyl alcohol is a fuel additive that is blended with petrol and used as eco-friendly transport fuel. The annual market for ethanol is estimated to be $13.6bn in the US and $26.2bn across the world.