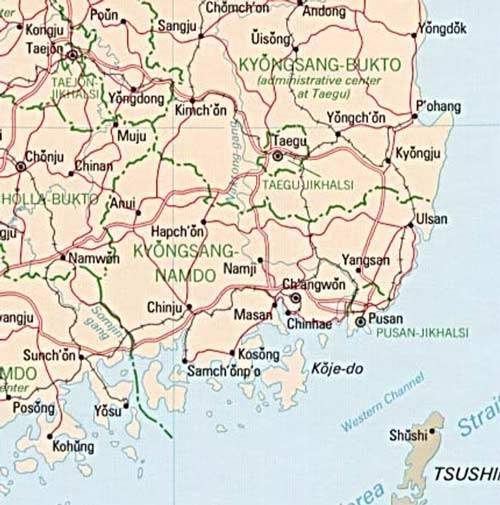 BASF is expanding its plants at Yosu and Ulsan in South Korea. The expansion was announced in March 2000, and the whole of the complex will go into commercial production between 2002 and 2004.

BASF is expanding its plants at Yeosu, Gulsan and Ulsan in South Korea. The expansion was announced in March 2000, and the three the complexes are expected to go into commercial production between 2002 and 2004.

Although South Korea was one of those countries hardest hit by the Asian crisis in 1997, the deregulation process, begun in 1990, led to several chaebols founding petrochemical branches. In particular, the ethylene base more than doubled between 1990 and 1993. A chronic oversupply problem was avoided only by exporting the surplus to China.

During 2000, the ethylene capacity was about equal to the production capacity. Assuming that demand for ethylene and its derivatives continues to grow at the present tremendous pace, the domestic industry will need to expand markedly to cope with the rise in demand.

The Yeosu plant will see three units (TDI, MDI, acid chlorides and chloroformates) go on stream in 2002, 2003 and 2004, which will be combined as a single petrochemical site. BASF was an early exponent of this doctrine of integration, called "Verbund" in German. BASF has successfully used this to cut costs in plants across the world. The Yeosu site is therefore designed to integrate various operations in order to maximise economies of scale in a way familiar at BASF’s other facilities across the world. Also, The Ulsan plastic site accomplished its backward integration by acquiring a styrene monomer plant with an annual capacity of 320,000 t/yr from local SK Evertec Company in October 2001.

BASF wishes to expand its isocyanate production in Yeosu. The company hopes that this will substantially consolidate its current strong position in Asia in polyurethanes. The existing facilities can produce 100,000t/yr of isocynates. As part of the extension, BASF will build its first unit, which is a new toluene diisocyanate (TDI) plant with an annual capacity of 140,000t/yr by early 2003. The production capacity of the existing diphenylmethane diisocyanate (MDI) plant will be expanded to 160,000t/yr by 2004 through debottlenecking measures. This represents an effective doubling in the unit’s production capacity.

For the TDI construction, BASF awarded its contract to a local contractor, Daelim Industrial Co. Ltd. in 2001, which is also working on the construction of plant of acid chlorides and chloroformates in the same Yeosu site.

Along with polyols (for example, polyesters and polyethers bearing free hydroxyl groups) or other compounds with active hydrogen atoms, isocyanates are used to make polyurethanes. The Ulsan plant will now include Dongsung’s polyols facility, taken over from a local Dongsung Chemical Co. Ltd in 1998. The annual production capacity of the polyol plant has expanded to 30,000t/yr through debottlenecking measures. Polyurethane foam is used in numerous applications such as bedding, car seats and trainers. The revival of the South Korean economy, along with other parts of the Far East, should guarantee strong market demand for the new BASF plant.

In addition, BASF will further strengthen its Verbund production at the Yeosu site in South Korea by building a new plant for acid chlorides and chloroformates. The plant, which will have an annual production capacity of 20,000t/yr, will begin operations by mid-2002. Acid chlorides and chloroformates are used to manufacture products such as catalysts for plastics production, antibiotics, pharmaceutical active ingredients and crop protection agents.

BASF has announced plans to build a new plant for the production of 3,000t/yr of vitamin B2 at its site in Gunsan, South Korea. The plant will go on-stream in 2003.

BASF has about 1,120 employees in South Korea (figures taken end of 2001). These provide about 65% of the company’s South Korean sales, which in total amount to about $560 million. The company grouped all its Korean operation under BASF Company Ltd on 31 December 1998. This subsidiary has hitherto concentrated on acquisitions such as the lysine division of South Korea’s Daesang Group for $600 million. Acquisitions were made much easier by the financial crisis, which struck South Korea as forcefully as any of its neighbours. However, BASF now plans an organic expansion based on investment in its local plants in Asia. This will include a major project in Gebeng in Malaysia, Shanghai in China, new TDI plants at Caojing in China and Singapore as well as the plants at Yeosu and Ulsan. BASF is considerably expanding its operations in Korea with plans to invest €400 million to build and enlarge its plants in Yeosu, Ulsan and Gunsan in South Korea.