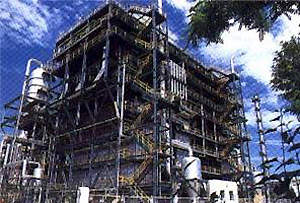 A cracking furnace at the Beijing plant. 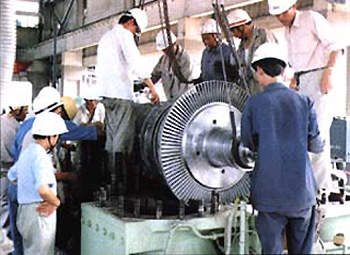 A compressor unit being serviced by Yanshan Petrochemical staff. 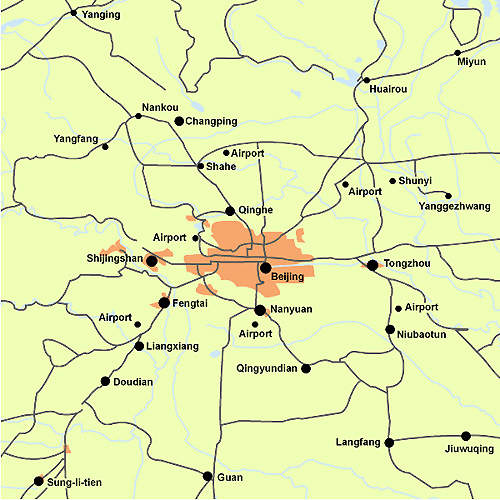 Map showing Beijing and surrounding areas in China. The new facility is close to major markets.

Yanshan Petrochemical Group, the largest petrochemical enterprise in China, chose Emerson Process Management’s PlantWeb field-based architecture with Foundation Fieldbus to automate benzene processing in its petrochemical plant complex in Beijing. The Foundation Fieldbus system is designed to reduce wiring costs, maintenance costs and procurement costs on the industrial plant used at the Beijing facility. This major expansion is expected to increase production capacity of the ethylene plant by about 58%.

PlantWeb is Fisher Rosemount’s field-based architecture that the company believes changes the economics of process automation through a high degree of modularity and flexibility. The plant complex will now be able to move beyond the DCS, delivering the information and performance required when and where it is needed. The Beijing plant’s new field-based architecture is an automation solution that delivers asset management, process control and management execution through three key components. The three components are "intelligent field devices", "standards & platforms", and "integrated modular software". These networked components are linked by open communication standards that include Foundation fieldbus at the field level, Ethernet at the plant level, and OPC at the supervisory level.

Foundation fieldbus is a key enabling technology in the new system that enhances and improves the plant’s performance. Unlike other digital protocols, Foundation fieldbus was developed specifically to meet the needs of process industries, is a worldwide standard, and is open to multiple suppliers and innovation.

Foundation fieldbus is an all-digital, serial, two-way communications system that serves as a Local Area Network (LAN) for factory/plant instrumentation and control devices. The fieldbus environment is the base level group of the digital networks in the hierarchy of plant networks. Foundation fieldbus is used in both process and manufacturing automation applications.

Unlike proprietary network protocols, Foundation fieldbus is neither owned by any individual company, or regulated by a single nation or standards body. The technology is controlled by the Fieldbus Foundation, a not-for-profit organization consisting of more than 100 of the world’s leading controls and instrumentation suppliers and end users.

TECHNOLOGY BENEFITS AT THE ETHYLENE PLANT

While Foundation fieldbus retains many of the features of the 4-20 mA analogue system, such as a standardised physical interface to the wire, bus-powered devices on a single wire, and intrinsic safety options, the technology offers additional benefits to users, in particular interoperability.

INTEROPERABILITY AT THE ETHYLENE PLANT

Foundation fieldbus has interoperability inherently. This interoperability is enabled by a combination of device descriptions and function blocks. A unique feature of Foundation fieldbus is that as new functionality and new devices are made available, all of the functionality of all the devices is made available to all other new devices. Therefore it is not necessary to rebuild, reconfigure or reprogram.

MARKET RATIONALE FOR THE FIELDBUS SYSTEM

For this major project at its ethylene plant, the advantages of the field-based approach with Foundation fieldbus technology were compelling. The company planned to expand its ethylene production capacity from 450,000 tons to 710,000 tons/year. Yanshan Group needed an advanced and reliable technology to support this expansion.