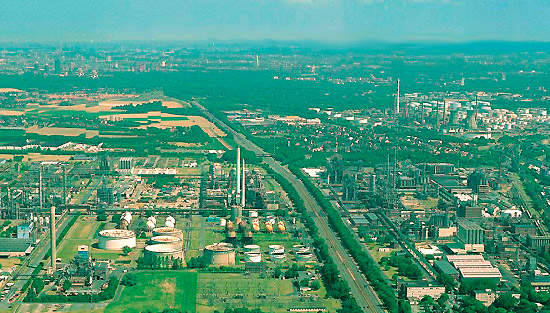 Basell's hdPE plant is located at its site in Wesseling, Germany. Basell said that the plant would allow it to play an expanded role in the western European pipe market which is expected to grow at a rate of 5.5%.

During June 2001 Basell announced plans for the construction of a high density polyethylene (hdPE) plant in Wesseling, Germany. The 320,000t/yr plant was successfully started up in February 2005. Investment costs were not disclosed.

The hdPE plant is based on Basell’s Hostalen slurry technology Basell claims that hdPE pipe grades based on this process can withstand elevated temperatures and pressure and can be used in applications such as waste, sewage and gas distribution pressure pipes.

ABB Industrial IT Solutions was awarded a contract to supply Operate IT control systems, Control IT controllers, engineering, configuration, commissioning, start-up, and operator training. The order also included the implementation of a redundant Profibus interface.

During 2002 VA Tech Wabag, an Austria-based company involved in water treatment, purification and recycling, was awarded a contract to build what it claimed was the world’s largest drying plant for hdPE. The order was valued at €1.8 million. The drying plant was built in cooperation with Tecnimont. Wabag added that its drying process would consume 25% less energy and 4% less steam than any technology previously used.

Companies within the Coperion Group were awarded contracts for the supply compounding and conveying equipment for Basell’s hdPE production plant. Coperion Werner & Pfleiderer supplied a co-rotating twin-screw MEGAcompounder, which transforms the polymer into pellets. A pneumatic dense-phase conveying system was supplied by Coperion Waeschle. This conveys the pellets through a stainless steel pipe to the silo cluster.

ProLeiT was commissioned to produce the control system for the hdPE logistics. The company was tasked with ensuring that the logistics automation would allow Basell’s staff to control the hdPE to the filling or processing stage independently. Benefits of the system are said to include the ability to make changes without programming equipment and commissioning entails only short production shut down.

Basell decided to build hdPE capacity so that it could play what it described as an ‘expanded role in the Western Europe pipe market which is expected to grow at the rate of 5.5% per year through 2009’. The plant had originally been scheduled to begin operation during the final quarter of 2003, but this was moved to the middle of 2004. After further delays the plant was successfully started up in the first quarter of 2005.

According to Basell hdPE pipe based on its Hostalen process technology can be used in demanding applications such as drinking water, sewage and gas distribution. The hdPE is said to be lightweight, exhibits high corrosion resistance, and is easy and cost effective to install.