The 550-acre (220ha) site for the Wacker Chemie polysilicon plant is located in the Bradley County in Cleveland.

Aerial view of the site for the new polysilicon plant. 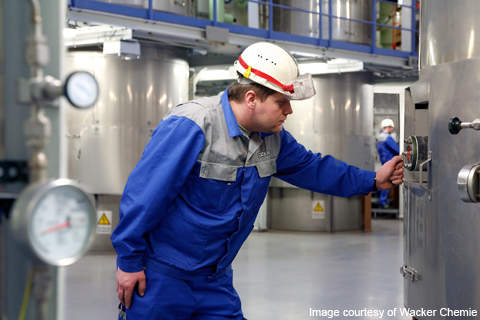 German chemicals manufacturer Wacker Chemie built a new polysilicon plant in the state of Tennessee, US. The plant manufactures hyperpure polycrystalline silicon to meet the anticipated growth in demand from the solar and semiconductor industries.

The new plant was built in a 550-acre (220ha) site in Bradley County in Cleveland. The facility is a fully integrated site that produces 15,000mt of polysilicon a year. Wacker invested $2.5bn in the project, which is expected to create 650 jobs when fully operational.

Construction of the plant was completed in April 2016.

Wacker initially planned to build a 10,000mt plant with an investment of $1bn, but later increased the capacity to 20,000mt per annum in anticipation of higher-than-expected growth.

The company purchased the land in February 2010 for approximately $20m as it had mid-term plans by that time to build the project. The company began construction of the plant in December 2010.

The site was chosen for several benefits, including the presence of suitable transportation infrastructure, water and electricity. Power supply in the location is reliable and economical and the company can source chlorine over-the-fence from the nearby OLIN Corporation plant.

The plant is 100% owned by Wacker Chemie. The company received line of credit for more than $1bn and secured prepayments to the same amount.

Construction began with earthmoving works to control perimeter erosion in April 2011, followed by demolition and offsite drainage works. Construction work was divided into packages and contracts were awarded accordingly. The contract for package 1A was awarded to a local construction firm Wright Brothers.

The feedstock for production of polysilicon is silicon. Wacker procures silicon metal from various global suppliers. Solar cells and photovoltaic devices require silicon of very high-purity, which is hyperpure silicon. In order to achieve such high-purity, the silicon is produced from a compound called trichlorosilane (TCS).

Trichlorosilane is a chemical compound that contains elements of silicon, hydrogen and chlorine. When heated to a high-temperature, the compound decomposes into individual elements, producing silicon.

Silicon is first granulated through grinding to produce hyperpure silicon. Hydrogen chloride gas is combined with the granules inside a reactor to form trichlorosilane liquid. The liquid is distilled to remove impurities such as boron, phosphorous or carbon. The purified liquid is then heated at 1,000°C in a reactor to undergo the Siemens process. Silicon atoms are condensed on silicon rods inside the reactor chamber. Hyperpure polysilicon is obtained by crushing the rods.

The facility integrates production of feedstock trichlorosilane, the polysilicon deposition reactors, and the recycling and processing plants.

It uses a closed-loop operation, which involves recycling of silane and other wastes to produce by-products that can be used for other chemical processes.

Closed-loop operation has several advantages. It reduces wastage and loss of process chemicals and yields more quantity of silicon into hyperpure polysilicon.

The global market for Polyvinyl chloride (PVC) products is estimated to register a compounded average annual growth rate of 5.1% during 2015-20. Wacker sees a strong demand for polysilicon from solar cell (photovoltaic) manufacturers and electronics industries.