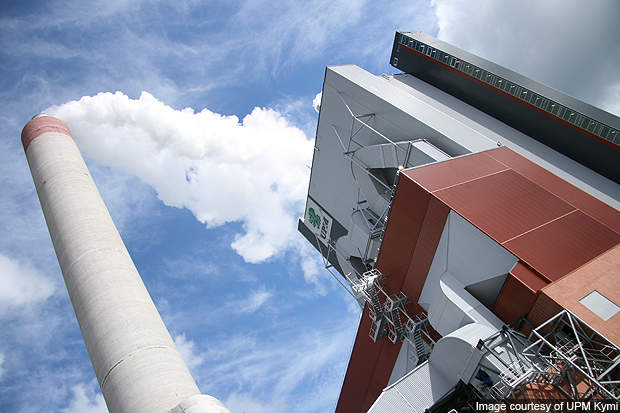 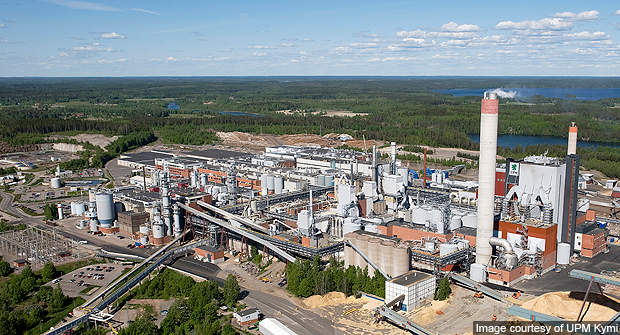 Aerial view of the Kymi pulp mill and paper factory. 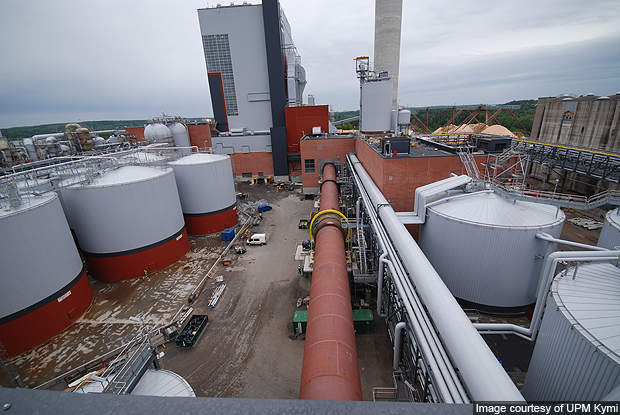 The various plants and heavy pipe bridges of the Kymi mill. 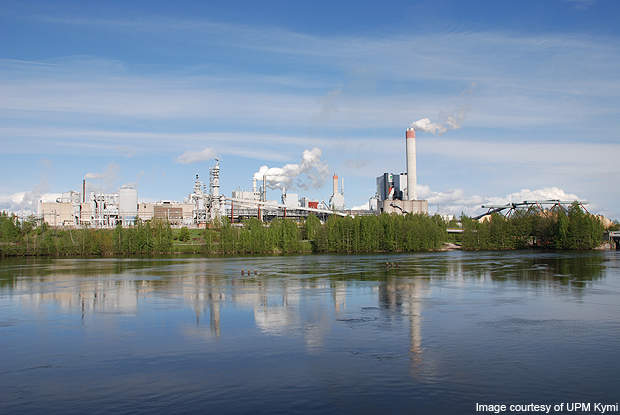 With the chemical recovery plant, Kymi has reached almost zero airborne emissions by 2009.

The Kymi paper and pulp mill of UPM Kymmene rebuilt its chemical recovery plant in 2008. The plant is located in Kuusankoski, Finland. The new plant was started-up in June 2008 making Kymi a modern, integrated fine paper production site. The integrated site produces pulp, fine paper and bio-energy, making Kymi a competitive and energy efficient factory. Kymi also became one of the first of its kind among paper mills to have the lowest airborne emissions in the industry.

The rebuilding of the chemical recovery plant was called UPM Kymi REC08. The total investment by UPM in the new plant was about €340m. It is the largest investment project in the Finnish forest industry and also of the UPM history.

The investment helps in future development of the integrated Kymi mill and secures the pulp supply and cost efficiency. The mill produces coated and uncoated fine papers. The Kymi chemical recovery plant also improved the annual paper and pulp capacities, self-sufficiency and bio-electricity output of the mill.

In March 2006 UPM made a decision to invest in Kymi pulp mill to build a new on-site chemical recovery plant. The REC08 project was to replace two existing outdated chemical recovery lines by a modern single-line recovery plant. The two old lines built in 1964 and 1976 were less efficient and lower quality in order to save on production costs. Work on the REC08 project began in May 2006. Construction of the plant was started in January 2007 and was completed in July 2008.

“It is the largest investment project in the Finnish forest industry and also of the UPM history.”

The plant also has a control room and service module elements such as offices, staff facilities, repair shop and two new electricity substations.

In August 2007 Kymi paper mill also underwent a €10m renewal work to increase the efficiency of, and maintain one of its paper machines. During the modernisation of paper machine 9 (PM 9), connections were created between the production lines and the chemical recovery plant. The raw water pumps, pipelines and related interfaces were connected with the plant in May 2008. The mill was shut down for six days for this project.

The plant was tested for one month before the start of operations. Production of white liquor began in summer 2008. The Kymi mill chemical recovery plant was officially inaugurated in October 2008. The old soda recovery boilers were disassembled in October 2009. The REC08 rebuilding of the chemical recovery plant project employed about 1,057 people during its peak time construction.

The wood raw material will be used for chemical pulp fibre and as an electricity generation fuel. The pulp production process involves chipping and screening of wood logs. The chips are then cooked in an alkaline chemical solution called liquor with additives. The process of recovering chemicals (black liquor) is an important step in the production of pulp. The rebuilt plant recovers these chemicals which are fed back to the mill for re-use. The energy generated during the dissolving of wood in the pulping process is used for power generation.

In August 2009 UPM reported to have achieved almost zero emissions from the Kymi mill, one year from the start-up of the chemical recovery plant.

The plant succeeded in meeting low airborne emissions and energy efficiency targets during its first year of operation.

The sulphur dioxide, odour and fossil carbon dioxide emissions from pulp production were also substantially reduced due to the installation of the improved recovery boiler burning and evaporation processes.

The plant also enabled increases in the use of biomass based fuels in the mill for power production up to about 90%. The plant also met the air emissions environmental permit limit.

The engineering contract for structural design and construction of the plant was awarded to Pöyry Group in April 2006. The €80m soda recovery boiler for the plant was supplied by Aker Kvaerner Power. The evaporation plant, causticising plant and the lime kiln were supplied by Andritz. Siemens supplied the steam turbine plant.