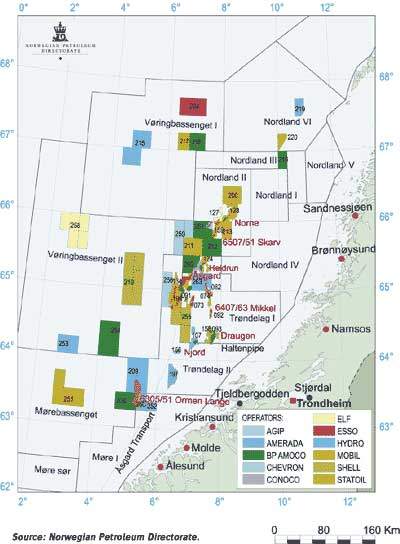 The Norwegian coast is the focus of much of the North Sea's oil, gas and petrochemicals activity by many companies. 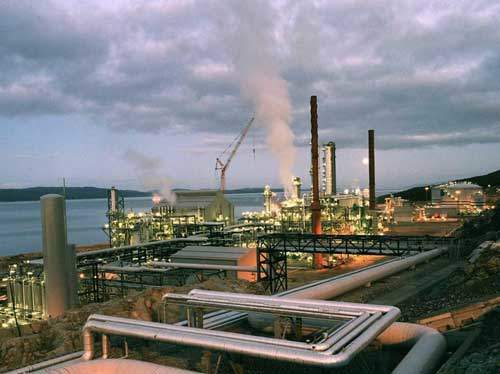 Tjeldbergodden is the site of an enormous Statoil complex. 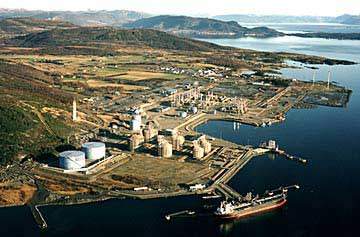 Statoil has several other facilities on the same coast. 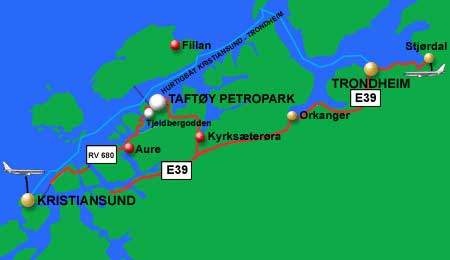 Map of the coast of Norway showing Tjeldbergodden. 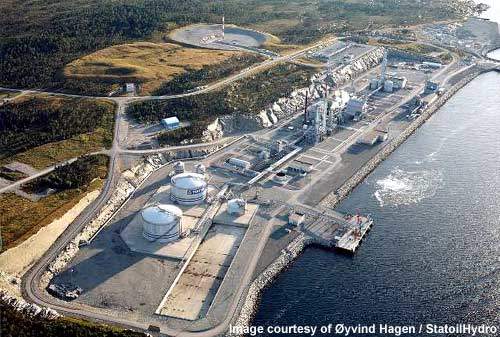 The Tjeldbergodden complex from an aerial view; the expansion of the methanol plant is due to start by mid-2008. 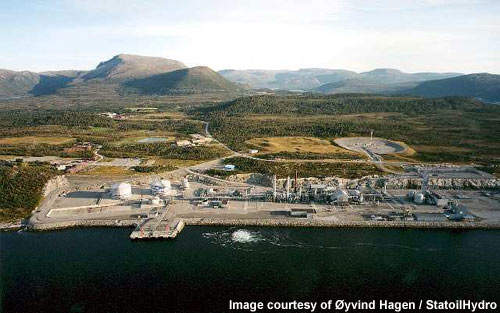 The Tjeldbergodden methanol plant is the largest in Europe and processes gas equivalent to 14% of European gas consumption. 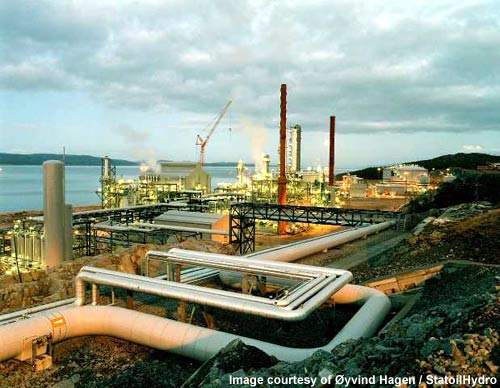 The plant produces methanol (900,000 tpa) and LNG; its feedstock comes from the Heidrun field in the Norwegian Sea.

The German technology group Lurgi has already developed to commercial maturity a new process for the production of propylene by conversion from methanol. Propylene is an important petrochemical base material for plastics and world demand is increasing at a rate of 5% per year. Industrial-scale implementation of the process was confirmed in 2001 by means of a demonstration plant, which was erected at StatoilHydro’s Tjeldbergodden plant in Norway by the middle of 2001.

The Lurgi Mega Methanol (LMM) process technology is a methanol to propylene (MTP) process implemented in a fixed-bed reactor. Chemical conversion takes place on an aluminosilicate catalyst provided by Süd-Chemie which has a high selectivity in favour of propylene. By-products are gasolines with a high research octane number (RON), LNG and fuel gas.

Extensive tests on the commercial viability of the process were carried out in November and December 2001. Lurgi built the demonstration plant jointly with Statoil, who expected it to yield valuable insight into a process which may represent an interesting market for methanol in the future. Commercial viability will depend on the economics of producing propylene from crude oil as opposed to using methanol. The propriety catalyst is exclusively supplied by Süd-Chemie and is a result of several years of intensive co-development in conjunction with Lurgi.

So far, around 98% of the worldwide propylene production has been based on petroleum. By contrast, the Lurgi-developed process obtains propylene from methanol produced from natural gas. With many countries having a surplus of natural gas, this is an attractive process.

The process works at a lightly elevated pressure (1.3 to 1.6 bars) and moderate temperatures of between 42°C and 490°C. Because of the extremely low coking tendency of the catalyst it is sufficient to provide for a simple, discontinuous catalyst regeneration process in the reactor itself. The raw propylene is obtained at high purity and can be easily processed at low cost.

Compared with other processes of converting methanol to olefins, the new Lurgi MTP process is characterised by its high selectivity for propylene and simplicity of process control. The benefit lies in low investment costs and high profitability.

The success of the Lurgi demonstration of the process of converting methanol to propylene at Tjeldbergodden is only one aspect of the economics of this highly profitable chemicals plant. The polypropylene project is still being held in abeyance for the mean time (as of January 2008). However, there is a lot of potential and such a technology could generate high revenue.

Methanol itself is a highly marketable chemical and with resources and commodities at an all-time high, there is no need to divert the stream into polypropylene production. The outlook for methanol in global markets remains positive due to the product’s potential in a number of applications.

In October 2004 Statoil negotiated with Aker Kvaerner Netherlands B.V. for pre-engineering and detailed engineering for the planned expansion of the methanol plant (35% increase in capacity from 900,000tpa to around 1.2 million tpa). In addition, an 860MW gas-fired power station was planned, with generation of 7TWH per year.

“The Tjeldbergodden methanol plant is one of the world’s largest and uses gas from the Heidrun field in the Norwegian Sea as feedstock.”

The power station project was shelved in 2006 because of worries about carbon dioxide emissions, although plans had been made to sequestrate the CO2 in old gas wells in the North Sea. The methanol expansion is due to start up by mid-2008.

The Tjeldbergodden industrial complex was first opened in June 1997 in Møre og Romsdal, Norway. It has four plants: a methanol plant, a gas receiving station, an air separation plant and a gas liquefaction facility, the latter with a 12,000tpa output. The methanol plant is one of the world’s largest and uses gas from the Heidrun field in the Norwegian Sea as feedstock.

Statoil owns 81.7% of the methanol plant and ConocoPhillips owns the remaining 18.3%. Construction cost was around NOK3.6bn. The carbon dioxide emissions from the plant total about 330,000tpa, due to clean methanol technology, while the annual nitrogen oxide emissions are just under 400tpa.