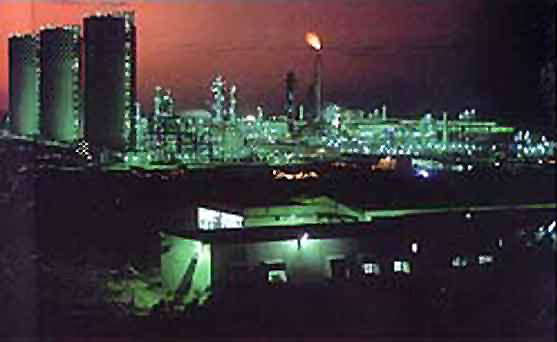 Rashtriya Chemicals & Fertilisers Ltd. (RCF) is an Indian urea and ammonia producer with headquarters in Mumbai (formerly known as Bombay) in India. Although the urea and ammonia industry has been deregulated in India, RCF is state owned. This may change as the Indian government pursues a slow privatisation policy. In late 1999, the Disinvestment Commission proposed cutting the government shareholding from more than 90% to 49%.

The expansions will allow higher capacity utilisation of the RCF plant. Of course, this will maximise return on assets. It was also intended to reduce the amount of energy needed for a given amount of ammonia, since there was a shortfall in natural gas supply.

RCF decided to revamp its Thal (Maharashtra) complex in two phases. The first ended in 1996, and the second in June 1999. The company now has a third, much greater, expansion planned.

It planned to expand its ammonia plants in two phases. The first began in 1996, and was intended to increase production to 1,500t/day. The second phase was to increase the capacity of each plant to 1,600t/day.

The hydrogen recovery unit was intended to recycle hydrogen that had previously been used as fuel. This resulted in a 4% increase in ammonia production. The hydrogen fuel was replaced with natural gas.

The new tubes were made from Manurite 36XM in order to heighten the threshold of the tube-wall temperatures. The thinner tube walls also allow higher catalyst volume and a reduced pressure drop.

The CO2-removal unit had to be upgraded to accommodate increased load. This allowed the absorber to handle process gases equivalent to 1,500t/day with a CO2 slip of less than 800ppm. This contrasts with the status quo ante which used a CO2 slip of 1,000 ppm to produce 1,350t/day.

Sulzer Industries trays were used as replacements in the process condensate stripper. The downcomer area was increased by about 9%. This allowed a better mass-transfer coefficient and increased capacity.

The second phase was intended to replace gas and converted gas boilers (which were causing problems), modify a circulation pump and the syngas compressor, install additional separators, a new refrigeration system and a suction chiller for the compressor.

To accommodate the greater load the syngas compressor barrels and the steam-turbine inlet-nozzle box were redesigned and the steam drum was replaced. Two new chillers have been added, providing new refrigeration. The pumps needed new impellers in order to process the much increased quantities.

The boilers had to be replaced due to damage from previous power outages (India has notoriously unreliable power supplies). A suction chiller added to the exit of the methanator is designed to improve the syngas compressor’s efficiency.

RCF has also been linked with a proposed fertiliser plant in Oman, although it is not clear whether it will press ahead. The company may also plan a plant to produce methylamines and its derivatives in India.