Near the Varonezh-Sintez-Kauchuk complex, Voronezh 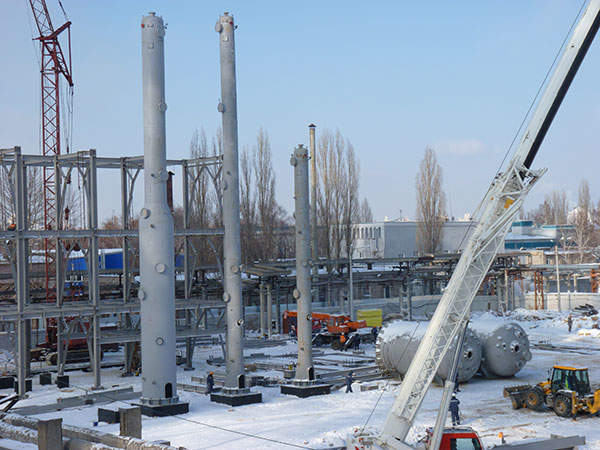 The expansion increased Sibur's thermoplastic elastomers production capacity, from the current 35,000 tons a year to 85,000 tons each year. Image courtesy of Sibur Holding.

Equipment being brought to the construction site. Image courtesy of Sibur Holding.

The expansion was started in June 2011. Image courtesy of Sibur Holding. 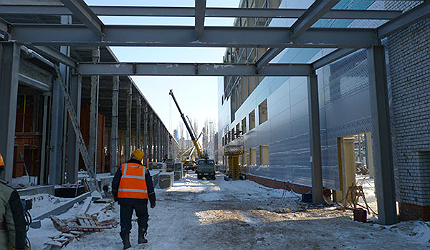 Russia-based petrochemical company Sibur commissioned its new chemical complex at Voronezh in the south-west of the country in May 2013. The complex reached its full production capacity of 50,000t of TPEs per annum in August 2013.

The complex is located within the vicinity of the Voronezh rubber plant, Varonezh-Sintez-Kauchuk. The facility was constructed over the old and decommissioned facilities that existed earlier.

Construction of the plant started in June 2011. The total investment on the plant was approximately 3.8 billion rubles ($120m). The project generated employment for about 160 people.

Sibur’s production capacity prior to the new plant’s commissioning was 35,000t of thermoplastic elastometers, which did not meet the demand in the market. The company initiated the expansion programme to benefit from the existing demand for the product.

The project was also undertaken to realise the potential of thermoplastic elastomers for road construction. TPE is primarily used for producing polymer asphalt cement (PAC), which is a major component used in coating the top layer of roads.

PAC is used in the construction of roads as it provides crack resistance, heat resistance and shear buckling resistance, including protection from water and frost, which are common in Russia.

The TPE produced from the complex is utilised for improving the quality of road surfaces and increasing the lifespan of roads from the present three / four years to seven / ten years. TPE also has other utilities, serving as roofing materials, mastics, adhesives and sealants.

Technology used at the Voronezh plant

Butadiene-styrene thermoplastic elastomers (TPE-s) belong to the thermoplastic rubbers group. They are processed through techniques such as injection moulding, extrusion, calendaring and blow moulding.

ACT30-01 and ACT30P-01 are thermoplastic elastomers based on styrene and butadiene containing non-staining intoxicant. In the case of ACT30-01 the styrene content will be 30%.

ACT30P-01 has the tendency to show certain properties of vulcanised rubbers at standard temperature. However, vulcanisation or curing are not required for processing them.

Components of the Russian chemical complex

The plant features several production units, building and storage facilities. There are a tank farm and a pumping station for resolvers, including a catalyst pig receiver and facilities for dilatation.

"The complex is located within the vicinity of the Voronezh rubber plant, Varonezh-Sintez-Kauchuk."

It also features a processing aid preparation unit, including a resolver preparation area and a cleaning area for monomers.

The complex is further equipped with administration and on-site quarters featuring laboratories, a central control facility and various department racks.

Rustep assisted Sibur with the construction.

In November 2010, the government of Tatarstan awarded construction contracts for establishing a new fertiliser complex in the town of Mendeleyevsk in the Republic of Tatarstan.