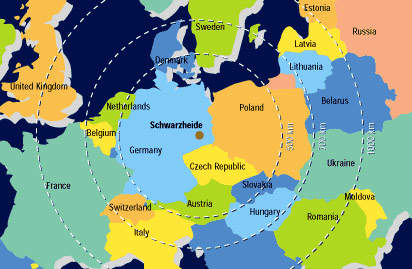 Schwarzheide has been a BASF manufacturing site since it was taken over in 1990. Formerly it belonged to the East German chemical conglomerate Synthesewerk Schwarzheide. In 1997, and up to 1999, the company was investing in a plant for the production of raw materials for polyurethane. This is, however, just part of a much larger complex, which is designed to be run according to the Verbund principle. That is, by building a number of plants at one site, the company can reap enormous economies of scale.

Since 1991, BASF has invested Deutsch Mark 1.3 billion on 12 new plants and plant upgrades as well as investing in the general infrastructure. New facilities, costing in excess of Deutsch Mark 600 million, include plants for Opus (BASF’s new fungicide), PS and PE foam, styrene copolymers and compounding facilities for engineering plastics.

The German company has, therefore, been making the Schwarzheide plant into one of the most modern in Europe. Schwarzheide is now the hub of BASF’s global polyurethanes business and is fast becoming the group’s production platform for eastern and central Europe.

The construction of the new polyurethane plant is BASF’s response to the ever-growing demand for solvent-free raw materials for coatings and adhesives. Acrylic resins are used as raw materials for coatings for wood, paper over-printing, plastics and for print pastes. Polyurethane dispersions are used as adhesives raw materials in the automotive, furniture and shoe industries as well as for various industrial laminations. Therefore the demand for the company’s products tends to go up in line with general economic growth. As a consequence, the market demands increased supply despite the relatively low economic growth rates of much of the European economy.

Logistics and purchasing services are extensive. BASF can organize transport by road, rail and air, and supervises goods loading and shipping management, including export management and customs clearance. Special services are available for hazardous materials.

The investment at Schwarzheide was made throughout the 1990s. Investment is currently planned to continue at a rate of about Deutsch Mark 100 million a year. BASF has also sought outside investors.

Sizeable federal grants increase the attractiveness of Schwarzheide Large firms can get grants covering up to 35% of their investment costs, and for small-and medium-sized enterprises (SMEs) the figure rises to 50%. The state government of Brandenburg, via its economic development agency, Wirtschaftsforderung Brandenburg GmbH (WFB), also provides excellent support, including rapid permission, for new investors. These schemes are designed to help bring the East German economy up to West German levels of prosperity.