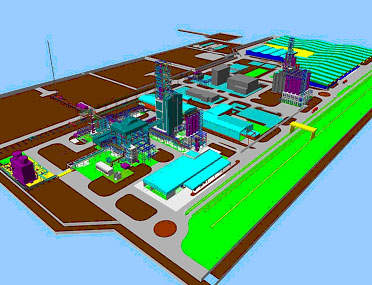 Technip worked with BP to develop the process design package for the 300,000tpa polypropylene plant.

The 220 000tpa low-density polyethylene plant was completed during the third quarter of 2005.

During 2004 South Africa’s Sasol won final board approval to invest in excess of R13bn ($2.1bn) to build a number of new production plants. The new capacity included ethylene and propylene output from a selective catalytic cracker (SCC) located in Secunda, South Africa. This unit began operation during the first quarter of 2006. It met initial operational requirements began beneficial operation in January 2008.

Along with the cracker is 220,000tpa of low-density polyethylene (ldPE), located in Sasolburg and 300,000tpa of polypropylene (PP), located in Secunda and slated to come on stream in 2007. The ldPE plant is also called Poly 3 as it Sasol’s third polyethylene plant in Sasolburg. This unit was commissioned at the end of 2005. The PP plant was commissioned in July 2008.

The plants were part of an investment, known as Project Turbo in which Sasol upgraded and built new capacity to meet South African government targets for introducing lead-free petrol and low-sulphur diesel.

The SCC was shutdown and refurbished in late 2009 to optimise its monomer production. The cracker was operating at lower rates than its design capacity. The refurbishment increases the monomer yield of SCC to about 80%. The monomer is supplied as feedstock to downstream polypropylene and polyethylene units.

The unit uses KBR’s Superflex Technology and produce 250,000tpa of propylene. The Superflex technology is a fluidised catalytic cracking process which converts light hydrocarbon streams to propylene and ethylene.

Japan’s Mitsui Engineering & Shipbuilding in partnership with Uhde South Africa was awarded the engineering, procurement and construction management (EPCM) for the ldPE plant.

Mitsui Engineering & Shipbuilding had also been responsible for the initial design of a 220,000tpa ldPE plant. The value of the EPCM contract was not disclosed.

During 2004 Kentz Engineers & Constructors announced that it had been awarded a contract to provide the electrical and instrumentation (E&I) portion of the ldPE project.

The scope of the work included installation of transformers, primary and secondary cable racking, as well as testing, pre-commissioning and hand over of all electrical packages. The contract was valued at R28m.

The switchgear manufacturing operation of ABB in Elandsfontein, South Africa, was awarded a contract to provide the ldPE plant with medium-voltage switchgears, 11kV switch board and a 6.6kV switchboard.

“These plants are part of an investment known as Project Turbo.”

During July 2004 France-based contractor Technip announced that Sasol had awarded it a contract for the construction of the 300,000tpa polypropylene (PP) plant in Secunda.

The contract included engineering, procurement services, construction supervision and overall project management. Technip said that the contract was worth €47m.

At the beginning of 2004 BP announced that it was licensing its Innovene process technology to Sasol for use in its 300,000tpa PP plant. BP also said that its CD catalyst would also be used allowing Sasol to ‘realise the full benefits of
the process technology’.

The use of Innovene technology allows Sasol to produce homopolymers, random copolymers and impact copolymers. The process is also said to have low capital and operating costs.

The cracker and polymer production facilities are part of a large investment known as Project Turbo.

Approved by Sasol’s board in 2002 Project Turbo, which also involves the production of clean fuels, allows Sasol to comply with South African government clean fuel regulations. The R14.5bn project also allows Sasol to use its available feedstock to produce more added-value materials.