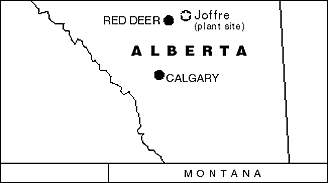 The new ethylene project is a linear alpha olefins (LAOs) plant, previously called "Prairie Rose". It is located in Joffre, close to Red Deer in Alberta in mid-western Canada. The owner of the plant is BP, through its subsidiary BP Canada Energy Company. BP and Amoco previously merged their operations, and in 2001 the name simply became ‘BP’, with the Canadian subsidiary becoming BP Canada Energy Company.

The BP project was part of a wave of investment in the petrochemical industry in Alberta, which also involved the construction of an ethylene plant by Nova Chemicals and Dow Chemical in a joint venture, at the site adjacent to the new BP facility. The Nova Chemicals facility has a close relationship with the BP plant. There is also interest in the ethylene market in other parts of North America, for the same reasons that have attracted BP to erect its new plant at Joffre.

The new plant uses ethylene upgraded in Alberta from natural gas to produce LAOs, up to 50% of which BP Canada Energy Company expects to sell to Alberta polyethylene manufacturers. Before, these producers imported all of their feedstock from the USA. LAOs are often used in the production of a wide range of consumer and industrial end products, including plastics, synthetic lubricants and detergents. Drilling fluids and synthetic motor oils are also major markets. The demand for these goods is powered by the strong growth in the North American market in general. According to the company, demand for C6-C8 alpha olefins has risen sharply recently, for use in production of high-density polyethylene and low-density polyethylene as well as these end-user products.

The Canadian plant is being added to an existing BP facility in Pasadena in the USA, although Joffre will be the only LAO production site in Canada. BP Chemicals also has a similar plant being expanded at Feluy in Belgium. The two plants could raise BP’s LAO production capacity to around one million tonnes per year.

The BP project began later than originally planned, as a result of extra engineering studies on the proposal. Construction of the new facility began in late March 1999, it reached mechanical completion in June 2001 and began production in September 2001. The total cost of the project is estimated at Canadian $400 million (US$250 million). The official Grand Opening of the site took place in May 2002.

The production capacity of the new plant for linear alpha olefins is 250,000t/yr, although this could be expanded to 375,000t/yr if the company regards it as enough of a commercial success to justify further expansion. The new plant uses feedstock from the nearby ethylene plant. The neighbouring plant belongs to Nova Chemicals and Dow Chemical (through its merger with Union Carbide) in a joint venture. The Nova Chemicals/Dow Chemical joint venture will also be one of the customers for the BP plant’s products, in addition to supplying BP with feedstock. This arrangement is sometimes referred to as a "virtual joint venture". Although it entails a close working relationship for mutual interest, the companies and sites remain formally independent of each other.