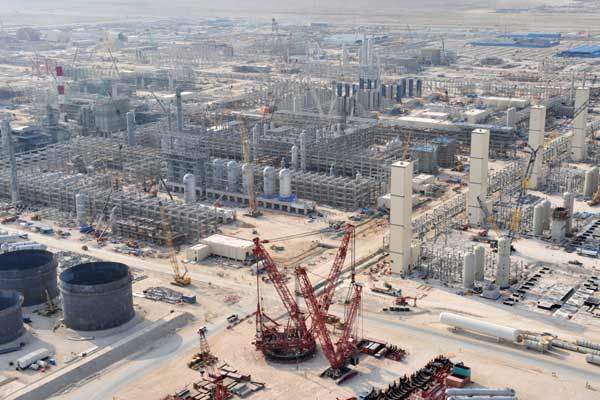 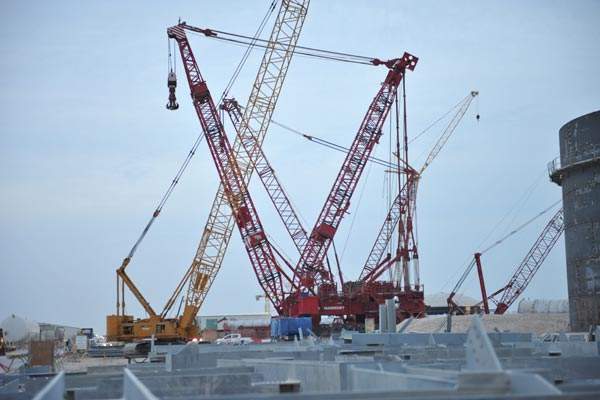 Some of the world's largest cranes were used to lower the reactors in place at the Pearl GTL plant. 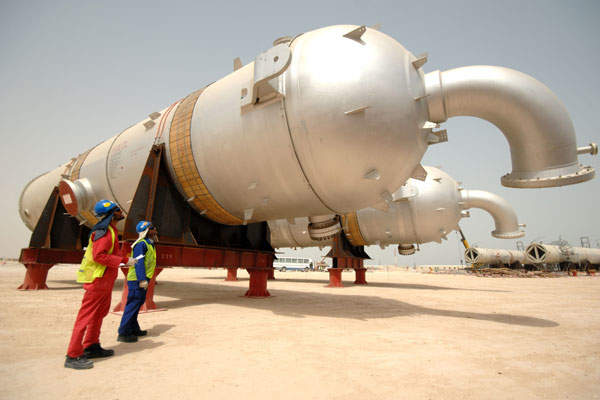 Workers at the Pearl GTL plant inspect two vessels prior to installation. 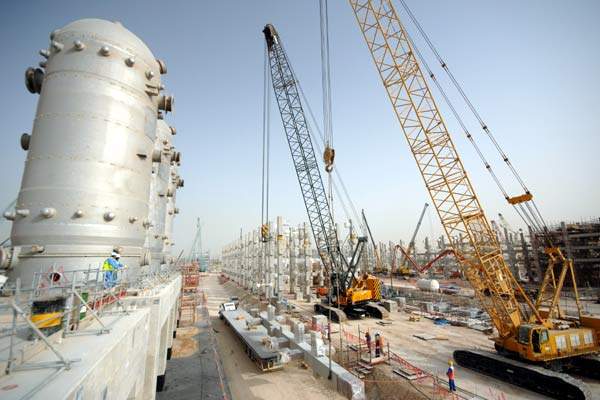 The Pearl GTL project has 24 reactors.

Under the development and production sharing agreement with the government of the state of Qatar, the fully integrated Pearl gas-to-liquids (GTL) project was developed in Ras Laffan, Qatar.

Shell sourced funds for this project from its internal accruals. Construction of the plant began in 2006 and majority of the work was completed by the end of 2010.

Pearl GTL opened a new global market for Qatari natural gas and allows Qatar to contribute constructively to improve the local environment by supplying a cleaner alternative transport fuel. Shell has extensive expertise in all aspects of the gas-to-liquids (GTL) value chain.

The technology that supports the two-train Pearl GTL plant is called Shell middle distillate synthesis (SMDS). Proved and tested at Bintulu GTL plant in Malaysia in 1993, this technology evolved over three decades of research and development by Shell.

The Bintulu GTL Plant has the capacity to produce 14,700 barrels a day (bpd). SMDS helps in reduction of capital expenditure and allows for faster processing. This technology enables Shell to increase the production capacity of Pearl GTL.

Free of sulphur, colour and odour, GTL is considered a cleaner burning fuel than motor diesel.

The liquefied petroleum gas (LPG) piped offshore is produced free of contaminants such as metals and sulphur. Obtained at the end of the chemical processes, methane is turned into chains of carbon and hydrogen atoms.

The length of each chain and its properties results in a particular GTL product.

Shell has developed the sulphur thiogro technology, where accumulated sulphur can be increasingly used for enhancing fertilisers and strengthening roads and concrete. Sulphur added to fertilisers was found to be beneficial in sulphur-deficient soils.

Joint field trials by Shell and the Sulphur Institute of USA proved the use of sulphur with fertilisers lead to a 14% increase in yields.

Chell subsidiary CRI / Criterion is involved in research, development and production of different catalysts needed for the Pearl GTL. Catalysts help in synthesising natural gas into the long-chain wax molecules that form the basis for the diesel and other products.

The less the time taken for drilling, the more money that is saved in terms of hiring men and materials.

Shell’s simultaneous operations (SIMOPS) have started drilling at the North Field rapid, with completion of drilling process well before schedule.

Simultaneous operations completed the drilling of the well and made it ready to produce, at a greater pace.

The drilling work was completed by the larger mobile drilling rigs positioned on the temporary decks.

Simultaneously, the temporary decks installed on each jackets carry out the production process of the operations.

Pearl GTL Plant produces 140,000 barrels of gas to liquid products a day and an equal amount of water is reused at the plant.

In the desert conditions of Qatar, water is a scant resource. Water produced at Pearl GTL is used for cooling and to run the steam systems. Some water is used for landscaping at the plant.

Contractors involved with the GTL plant

WorleyParsons received a contract to provide engineering, procurement and construction (EPC) services to the Pearl GTL plant in November 2016.