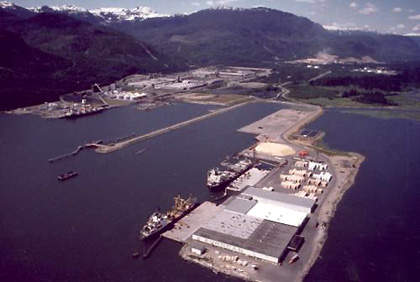 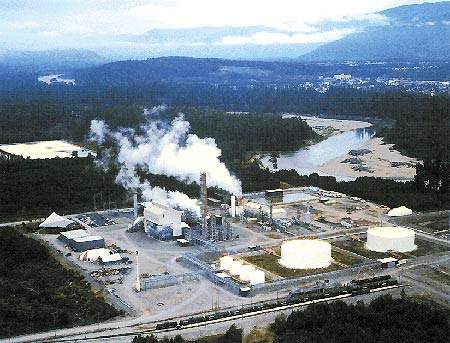 Pacific Ammonia Inc (PAI) increased ammonia production by 40% at its Kitimat plant. The retrofit that enabled it to do so was the first commercial application of two new ammonia technologies. The reduced-energy ammonia synthesis process used a new, non-iron catalyst. The addition of a reforming exchanger produced the additional synthesis gas, which boosted ammonia production. In 1992, the plant was converted to the Kellogg Advanced Ammonia Process (KAAP) technology. KAAP enabled the plant to maintain 100% of its operating capacity while decreasing steam usage by 30–40% and electricity consumption by 5–10%.

Phase 2 of the retrofit was the addition of a reforming exchanger system to reform natural gas feed. This unit uses process heat to eliminate the fired, primary reformer. The combination of these two technologies increases energy efficiency by recovering heat at a much higher temperature.

“The new reformer increased production of synthesis gas at the plant’s front end and boosted ammonia production by 40% to 300,000t/yr.”

Japan’s Mitsui & Co. purchased the plant in 1994, with PAI a wholly owned subsidiary of Mitsui. In 1994, PAI added a new Kellogg Reforming Exchanger System (KRES). The new reformer increased production of synthesis gas at the plant’s front end and boosted ammonia production by 40% to 300,000t/yr.

In 2000 the plant, which is now operated by Methanex Corporation on behalf of Pacific Ammonia, had its production provisionally cut because of a temporary close down of the nearby 500,000t/yr methanol plant. This was closed because of the high cost of North American natural gas feedstock. However, both of the plants resumed production in 2002.

In 2006 a decision was taken to close down the methanol plant for good and with it the ammonia plant. The production has been passed onto other more economical plants in Chile and Trinidad where the feedstock is less expensive.

PAI’s retrofitted ammonia synthesis loop operates at about 2,000psia. Compressed fresh feed and recycle exit the compressor and are combined with compressed syngas from the KRES expansion project. The combined streams pass through a feed/effluent exchanger. The partially heated converter feed then flows to the existing converter, which uses a conventional magnetite catalyst.

The effluent from this converter flows to a steam superheater, then to a steam generator. The generator produces medium-pressure steam, which drives the feed compressor. The gas exits the boiler and flows to the KAAP converter. The stream enters the reactor through a side inlet and is heated in the internal exchanger tubes. An external bypass line around this exchanger provides first-bed inlet temperature control.

The gas flows through the first bed, then on to the shell side of the internal exchanger and to the second bed. The effluent from the second bed of KAAP catalyst is about 19% ammonia. The effluent is cooled in a second medium-pressure steam generator. It then flows to the shell side of the feed/effluent exchanger. Shell-side effluent from this exchanger is cooled in a water exchanger, where ammonia condensation begins. A four-stage unitised exchanger completes the condensation process.

The ammonia is cooled to -33°C in a two-case, centrifugal compressor. The refrigerated liquid is then removed and sent to storage. Recycle gas is passed back through the tube side of the unitised exchanger and is returned to the last wheel of the syngas compressor. Some of the recycle gas is sent to compressors that were added as part of the KRES front-end expansion.

Because the front-end expansion is based on reforming rather than purge gas, the feed gas contains more inert materials than it did before the revamp. As a result, purge gas from the expanded plant is processed in a membrane hydrogen-recovery unit. This unit recovers 85–90% of the hydrogen for recycle. Waste gas from the membrane separator is blended with purge gas from the refrigeration compressor and flash gas from the flash drum. PAI uses this combined stream as supplemental fuel.

“In 2006 a decision was taken to close down the methanol plant for good and with it the ammonia plant.”

Kellogg’s work on the front end was limited to the reforming exchanger system. Kellogg modified the existing secondary reformer with a specially designed mixing/combustion zone at the unit inlet. It is this device that eliminates the burner. New equipment packages were installed for syngas drying and purge gas recovery. Because PAI uses nitrogen produced by its air-separation plant to make ammonia, the waste oxygen stream from the air separator was available for enriching the air to the autothermal reformer.

Enriched air keeps the H/N ratio within prescribed limits and maintains the heat balance around the reforming exchanger and autothermal reformer.