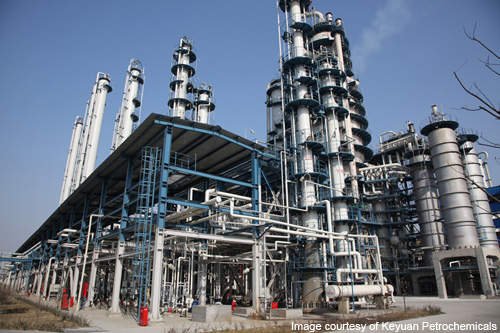 Outside view of the existing Keyuan Petrochemicals facility.

Keyuan Petrochemicals is an independent manufacturer and supplier of petrochemical products in Ninhgbo in Zhejiang province, China.

The company manufactures and sells aromatics, propylene, styrene, MTBE and other chemicals with an annual production capacity of 550,000mt.

In October 2010, Keyuan announced plans to construct a new Styrene-Butadiene-Styrene (SBS) facility as part of expanding its manufacturing base to meet the growing demand for the product in the local market. Estimated at $17.5m, the project broke ground in September 2010 with opening scheduled for the final quarter of 2011.

The new facility will operate at 80% capacity in the first year of production. It will add 70,000mt to the existing capacity to generate a net profit margin of 10% to 11%.

“Keyuan Petrochemicals was established in 2007.”

Other projects proposed in the company’s expansion plan include construction of 100,000mt of petrochemical storage capacity, a raw materials pre-treatment plant and 300,000mt of asphalt production capacity. These three projects are estimated to cost $70m and are expected to come online between the third quarter of 2011 and the first quarter of 2012.

The expansion will increase the company’s production capacity by 30% to 720,000mt a year.

The new SBS facility is being constructed in three phases on a 1.2m ft² area adjacent to the existing facility in Qingshi Chemical Park.

The first phase includes civil engineering works, which are currently underway. It began in September 2010 and is scheduled to be completed by March 2011.

The second phase will involve installation of equipment between April and September 2011. The third and final phase consists of two months of trial runs scheduled in October and November 2011 with commercial operations set to begin at the end of 2011.

A section of land was acquired by Keyuan in August 2010 at an investment of $5.8m to execute the expansion plan.

SBS is a hard rubber-like substance used in the manufacture of shoes, tyre treads and other products that need to remain sturdy and durable for a long time. Also known as block copolymer, it is made up of three segments; the first and third segments are a long chain of polystyrene and the second is polybutadiene.

Alkyl mercaptan is a chain transfer agent that prevents the formation of a high molecular weight and the viscosity of the product. The presence of polystyrene makes SBS durable while the rubber-like property comes due to the presence of polybutadiene.

China is facing a growing demand for SBS from individual and industrial consumers. The change in demand for SBS has grown at a compounded annual growth rate of 14.2% in 2002-2006 and the supply variation at 26.1%, resulting in an average import of 2.63m metric tons.

“A section of land was acquired by Keyuan in August to execute the expansion plan at an investment of $5.8m.”

The current annual production capacity of the country is 600,000mt.

It is estimated to reach 750,000mt, resulting in the import of around 12% of the demand, from countries such as Japan, Korea, Taiwan and the US.

The value-added nature of SBS and the wide gap between demand and supply are expected to provide good margins to domestic manufacturers.

Keyuan Petrochemicals was established in 2007. It operates through its wholly-owned subsidiary Keyuan Plastics.

Keyuan commenced operations of its first manufacturing unit in October 2009. The existing plant occupies a 594,000ft² production space and 19,500ft² laboratory and office space.  It has 100,000mt of storage capacity, which is equally divided for raw material and finished goods storage.

In addition, the facility has 5,000mt capacity of shipping dock with a 10-truck loading facility, mostly used to transport feedstock and finished products.