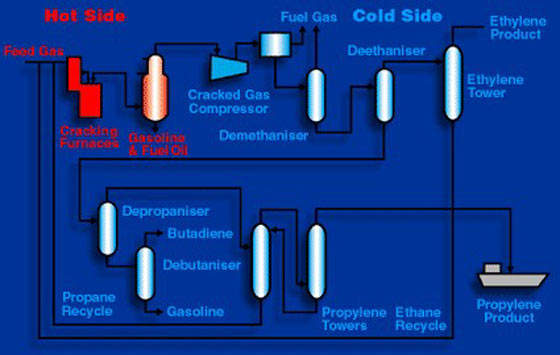 Optimal Olefins (Malaysia) Sdn Bhd is a joint venture formed by Petroliam Nasional Berhad (Petronas) of Malaysia owning 64%, Union Carbide Corporation, which has been bought out by Dow Chemicals owning 24%, and South Africa’s Sasol Polymers (formerly Polifin) owning 12% of the company. It has its headquarters in Kuala Lumpur, Malaysia.

The project is an ethylene steam cracker sited at Kertih, Terengganu province in Malaysia. The owner is Optimal Olefins (Malaysia) Sdn Bhd. The turnkey contract was awarded in November 1998. The plant was completed in October 2001.

The engineering, procurement and construction (EPC) contract was awarded to Linde AG. The company said this contract was worth more than $300 million (in the region of Malaysian $1.1 billion). Linde AG will act as process licensor and main contractor. Detailed engineering, procurement and construction is the responsibility of Samsung Engineering (of South Korea). The cracking furnaces contract was given to Selas Fluid Processing Corporation. This is a subsidiary of Linde based in Blue Bell Pennsylvania, USA. Project management and engineering services will be provided by Kvaerner Process and Kvaerner (Malaysia).

The feedstock for the ethylene will come from nearby gas processing plants owned by Petronas.

Malaysia has so far been relatively unaffected by the general crisis in East Asia. The government imposed a series of exchange controls and anti import measures which have given the local economy some shelter from the surrounding storm. Thus, the country has retained good GDP growth, which is fast outpaced by growth in chemicals industry investment.

Despite the Asian crisis, Petronas is pursuing a policy of aggressive expansion. This involves drawing in foreign investors for about half the money. The success of this aim is likely to be adversely affected if Malaysia’s exchange rate controls were to become a permanent feature, although their temporary imposition does not seem to have had a damaging effect. It may be worth noting that Union Carbide’s chief executive Dr William H Joyce has said "I think the underlying fact is that you have to understand the objective…what the country is trying to accomplish, what we are trying to accomplish. If the objectives are the same, then we should be able to work together and make it a success." This can be read as a hint that the capital controls will not be a permanent obstacle.

Union Carbide Corporation is an US petrochemical corporation based at Danbury, Connecticut in the USA. It is active in numerous petrochemical projects around the world. Union Carbide Corporation, like other petrochemical companies, was hit by the fall in demand which followed the Asian crisis of 1997. The crisis not only reduced demand in Asia itself, it also pushed global prices down as the spare capacity was used to export to Europe and North America. Thus, it is pursuing the Malaysian expansion in tandem with another olefins project at the Shuaiba complex in Kuwait. Indeed the crisis did have a silver lining in the devaluation of the Ringitt. This helped to push prices for local procurement and engineering down, substantially cutting costs.