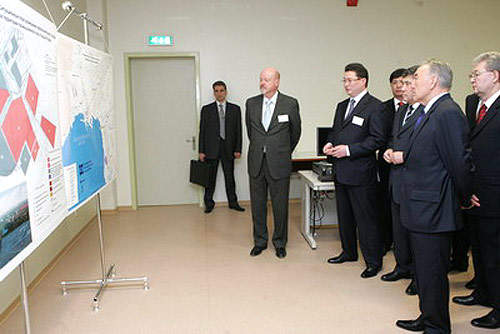 General director of SAT & Company, Nurlan Abduov, presents to the Head of State the plans for the development of KPI's integrated gas-based petrochemical complex. 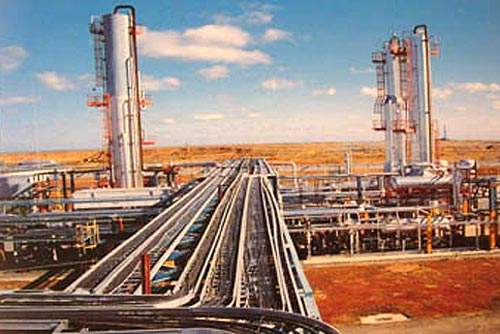 Kazakhstan has enjoyed steady growth of its GDP for the last five years, with year-on-year increases. 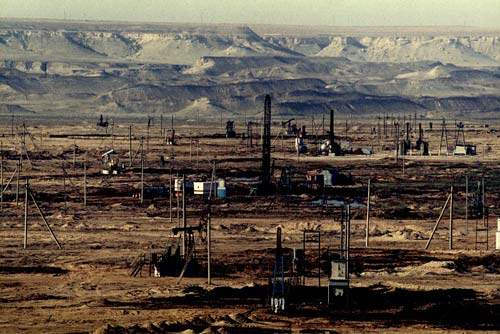 The Republic of Kazakhstan is a large landlocked country in Northern and Central Eurasia.

During May 2007 Kazakhstan’s Energy and Natural Resources Ministry approved a feasibility study for the development of a gas-based petrochemical complex in the country’s Atyrau Oblast, Karabatan region.

The Atyrau petrochemical project is being developed by Kazakhstan Petrochemical Industries (KPI) who will own and operate the complex. It is scheduled to be built in two stages. Sinopec Engineering will be responsible for the first stage completion by 2014, with LG Chem in charge for the second stage completion by 2016. The plant will be based around a cracker producing 1mtpa of ethylene. Other products include polyethylene and polypropylene.

"The project is part of the Kazakhstan Government’s initiative to develop to country’s petrochemical industry."

A propane dehydrogenation unit is also planned. Initial investment costs were put at $5.2bn, but increased to $6.3bn due to rise in raw material prices. The facilities are expected to be built by 2014.

In March 2009, the Tengizchevroil joint venture signed an agreement with KPI to annually supply six to seven billion cubic metres of gas feedstock to the production plants.

Lummus Technology, a CB&I company, will provide certification and basic engineering for a propane dehydrogenation unit and a polypropylene plant as part of the contract signed with KPI in April 2011.

The design capacity of each unit will be 500,000tpa. The unit will utilise the CATOFIN technology to transform propane to propylene.

The stakeholders in Kazakhstan Petrochemical Industries are Kazakhstan’s Sat & Company, a private company holding 49%, and Kazakhstan’s National Oil and Gas Company KazMunaiGas Exploration Production (KazMunaiGaz) holding the remaining 51%. LyondellBasell had a minority stake in KPI, but withdrew from the project development in January 2010.

Polyethylene and polypropylene technology at the Karabatan-based complex

"The Atyrau petrochemical project is being developed by Kazakhstan Petrochemical Industries (KPI) who will own and operate the complex."

LyondellBasell was selected for supplying technology to the polyethylene and polypropylene facilities of the complex in August 2008.

Following the withdrawal of LyondellBasell, China Petroleum & Chemical (Sinopec Engineering) was awarded a $2bn EPC contract in March 2010 to carry out the first stage of the project, which includes building a polypropylene plant. Sinopec will buy and export all the production from the plant.

South Korea based LG Chem was awarded a $4bn contract by KPI in August 2011 to work on the second stage of the petrochemical complex. The second stage will involve construction of ethylene and polyethylene plants, with design capacities of 840,000tpa and 800,000tpa respectively.

During 2008, the Development Bank of Kazakhstan had concluded two agreements with the Export-Import Bank (EximBank) of China for credit facilities totalling $400m. The financing terms enable the Bank of Kazakhstan to finance projects over the next 20 years.

The EximBank also committed to provide a loan of $1.26bn for the Atyrau Petrochemical Complex development. KazMunaiGaz will invest $300m for the complex, while it will receive a budget credit of $140m from the Kazakhstan Government.

The projects include those in the chemical and petrochemical sectors, as well as energy, transport and communication and metallurgy.

The project is part of the Kazakhstan Government’s initiative to develop to country’s petrochemical industry, with the establishment of production facilities for integrated processing and refining of hydrocarbon raw materials.

The planned complex will be the country’s first integrated gas chemicals complex, producing high-quality polypropylene, polyethylene and other petroleum-based products. It will be built on a greenfield site.

Kazakhstan has about eight billion tons of proven recoverable oil reserves. Industry analysts believe that planned expansion of oil production, together with the development of new fields, will enable the country to produce as much as three million barrels a day by 2015.

The project’s success will take Kazakhstan into the world’s top ten oil producers.