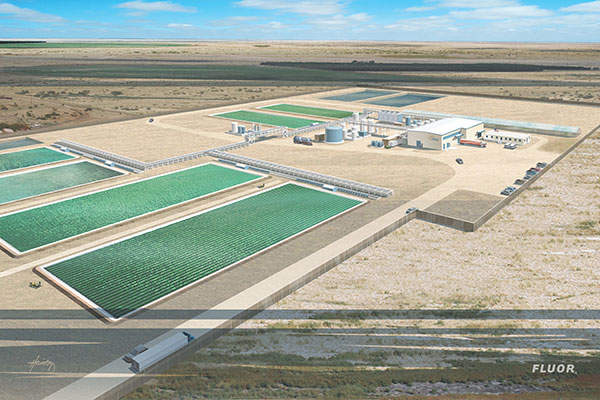 A rendition of the SunSprings Demonstration Plant in Hobbs, New Mexico. 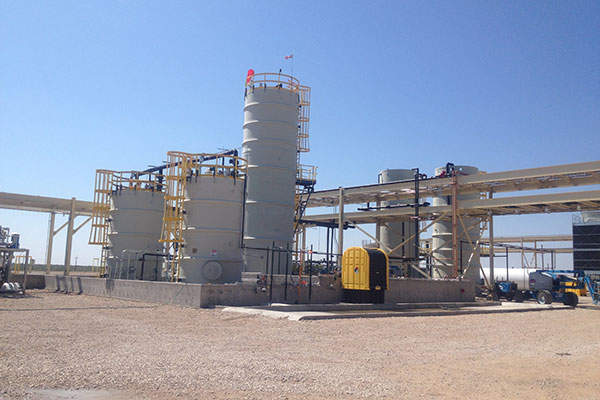 The SunSprings demonstration plant currently covers an area of 80 acres, with an active production space of four acres. 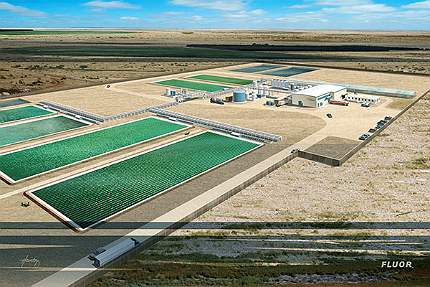 Joule Unlimited, a company based in Massachusetts, US, commissioned its first SunSprings Demonstration Plant located at Hobbs in Lea County, New Mexico, in September 2012. The company secured the site for the renewable and sustainable fuels production plant in May 2011 and started construction works in early 2012.

The engineering, procurement and construction management (EPCM) contract for the plant was awarded to Fluor in 2011. Pettigrew & Associates acted as the site civil engineer, providing turnkey design and construction engineering services. The project has created 20 jobs to date.

"The demonstration plant was constructed owing to the growing ethanol market, which was valued at $64bn in 2012."

The company signed a lease of agreement for 1,200 acres of land in Lea County in 2011, with an option to increase it to 5,000 acres to carry out its operations.

The demonstration plant at Hobbs currently covers an area of about 80 acres. The plant will utilise about four acres for active production of Sunflow-E.

The facilities at the demonstration plant include an active production area comprising of rows of circulation units, a central plant to accommodate the fuels for final separation, a tank farm to store the final product, water and CO2, evaporation ponds meant for disposal and site buildings.

The feedstock for the plant includes sunlight, brackish water from aquifers, waste CO2 from industrial flue gas streams and the company’s proprietary microorganisms.

The process technology involves the use of the company’s proprietary Helioculture platform. The technology is facilitated by Joule’s patented SolarConverter system, which makes use of interconnected circulation modules in the form of thin and standard capsules filled with its proprietary microorganisms, non-potable water and micronutrients.

Each module is fed with waste CO2 sourced from the local industrial flue gas streams. The microorganisms are kept in motion to enable them receive maximum exposure to sunlight, driving photosynthesis.

The microorganisms charged by sunlight absorb the CO2 and produce fuel molecules which are transferred to the medium on a continuous basis. The medium circulates through a separator extracting the end product, which is finally sent to the central plant for separation.

The process consumes up to eight weeks of time, after which the modules are flushed and cleaned on a rotational basis.

Joule was founded in 2007 by Flagship VentureLabs. It is privately held and headquartered in Cambridge, Massachusetts, with operations at Leander in Texas, Hobbs in New Mexico and The Hague in Netherlands. It plans to begin construction of a number of commercial plants in 2014 at multiple locations worldwide for the production of Sunflow-E.

The company announced its capability of converting waste CO2 into essential components of gasoline (Sunflow-G) and jet fuel (Sunflow-J) in April 2013.

It now plans to commercialise its products Sunflow-E (Ethanol) in 2015, followed by Sunflow-D (Diesel), for the global market. It will initially produce 10,000 gallons of Sunflow-E per acre on an annual basis when it starts commercial production in 2015, and further increase it to 25,000 gallons per acre per annum.

Joule signed a strategic partnership with Audi to further enhance the commercialisation of its sustainable Sunflow-E and Sunflow-D transportation fuels, in September 2012.

Algenol Biofuels is constructing an integrated algae-based pilot-scale biorefinery in Lee County, in the state of Florida in the US.