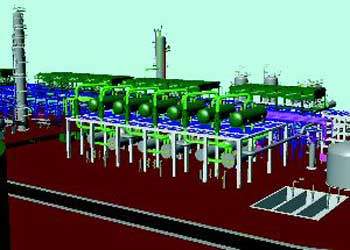 The modified Claus (also known as conventional Claus) process is the workhorse in sulphur recovery, and is used in more plants world wide than any other process.

The project is an expansion of the methanol plant in the Jose industrial complex in Anzoategui, Venezuela, on the Caribbean coast. It is sponsored by Metor, a locally based joint venture.

Methanol is the basic raw material for the manufacture of MTBE and TAME (an octane enhancer used to obtain high-octane gasoline fuel). Methanol is also used for the production of acetic acid (for solvents), formaldehyde (for
resins, adhesive) and other products in the chemical and pharmaceutical industry. Venezuela has a natural advantage in this field because it has such abundant oil and gas reserves. The market for methanol fluctuates as supply
increases and decreases, pushing prices up and down. This puts a premium on cheap feedstock – hence Venezuela’s advantage. Venezuela has a further advantage in its proximity to the large US market, as well as to the growing markets in Latin America.

The new methanol project in Jose was initiated in 1998, and completed in 2001. It is therefore currently beginning its first full year of commercial-scale production. It may be followed by
other Pequiven investments. The company has speculated on the possibility of extensive further expansion of methanol production to vast levels before 2008. However, these schemes are vaguer than the current projects. The cost of the new unit is expected to be $280 million.

Metor produces Grade AA methanol mainly destined for export and represents an important contribution to the industrialisation process of the immense proven natural gas reserves of Venezuela. This second production train will require an additional volume of natural gas, around 95 million cubic feet per day, which will be supplied by PDVSA Gas under a long-term agreement with the company.

The second production train will be built on the existing plot of land owned by Metor in Jose and the integration with the existing plant will offer obvious advantages in terms of reduced construction costs and schedule, in addition to economies of scale. The technology for the new plant will be provided by Mitsubishi Gas Chemical Company Inc and incorporate the latest process design improvements resulting in ease of operations and savings in maintenance and operating costs.

The project also involved a new marine dock for liquids, solids and containers being built, as well as the new power and industrial water supply facilities. The latter projects are estimated to be worth $200 million in total. They are being carried out by a joint venture of Earth Tech and Petroquimicos de Venezuela (Pequiven).

Pequiven is the petrochemical arm of Petroleos de Venezuela, SA, known as PDVSA. Thus, its participation is important for gaining access to feedstock. It is an integrated petrochemical company which operates 13 fully-owned plants, producing basic petrochemicals and fertilisers. The methanol expansion is a part of Pequiven’s aggressive expansion plans, which have seen major investments in both oil and gas and petrochemicals in recent years. As Pequiven is a state-owned company, its investment plans may be affected by changes in government. The present Venezuelan government’s financial plans may not lay the same emphasis on petrochemical development as was the case when the investment plans were originally drawn up. The present government has already delayed a privatisation programme which would have seen Pequiven enter the private sector. Public ownership also affects the company in the sense that it complicates the firm’s efforts to raise finance for its capital investments.