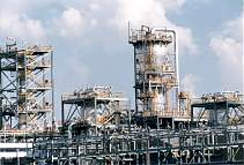 Jamnager is the world’s largest grassroots petrochemical complex which is seeing major capacity expansion in polypropylene and paraxylene as well as in other areas. The refining plant alone has a capacity of 27 million tonnes per year, which has increased to 108% of the operating rates since April 2000. The entire plant is spread over 31km². The main new plant is a polypropylene complex with a capacity of 525,000t/yr. It is located 480km north of Mumbai (formerly known as Bombay) in Gujarat, India and next to Reliance’s recently completed refinery.

The total investment in the Jamnagar complex included the refinery, integrated petrochemical complex, port facilities, captive power facilities and related infrastructure. Reliance Industries, the plant’s owner, states that this is in the region of Rupees 24 billion crores ($6bn). Reliance’s investments are 5% of gross assets if the Indian corporate sector.

The engineering, procurement and construction (EPC) contract was won by Kvaerner ASA’s Engineering and Construction division. Kvaerner’s UK operation undertook all overseas procurement activities for this contract. The company is able to liaise effectively with the Indian operations through its global computer network. This allowed it to carry out design and engineering with its local sister company, Kvaerner Powergas (India) Ltd. Kvaerner views working across its different offices concurrently as a key part of its cost cutting. Kvaerner is the only EPC contractor to have carried out work on all three of Reliance’s petrochemical sites in India.

During the course of 1999, Reliance opened two new paraxylene units in Jamnager. A third 400,000t/yr paraxylene plant was opened in Jamnagar in January. The company could then produce 1.2 million tonnes per year, making it the third biggest paraxylene supplier in India. The product goes to a mixture of internal customers, Asian customers and (mainly European) export markets.

Reliance Industries suggested at that time that it would be willing to spend $2.5 to $3bn in order to expand its Jamnager petrochemical complex. The first stage would be a world-scale naphtha cracker with capacity for 1.3 million tonnes to 1.5 million tonnes per year of ethylene. The cracker would get feedstock from the Jamnager refinery. Downstream units will include two 450,000t/yr to 500,000t/yr polyethylene units, as well as ethylene glycol and a linear alpha-olefins plant that will produce butene and hexene comonomers for polyethylene. The new complex would provide 750,000t/yr of propylene.

Reliance envisages work on being completed in the middle of 2003. According to Reliance’s managing director, the project could be financed from cash flow. For the financial year ending March 2001, Reliance reported total sales of Rupees 30,963 crores ($6.6 billion). The multiplier effect is expected to put the expansion at around 6.5% of GDP.

RELIANCE AND THE INDIAN PETROCHEMICAL MARKET

Reliance Industries is one of India’s biggest industrial groupings and the largest private sector company. Reliance built its first polymer cracker in 1992 because although natural gas is cleaner and cheaper, India has a very limited supply.

Reliance, which is pursuing an aggressive investment strategy in Jamnager, is also one of the prime contenders to take over part of the state-owned Indian Petrochemicals Corporation Ltd (IPCL) when it is privatised. Reliance could exploit major synergies with the state-owned giant. The Indian government might also be concerned at the near monopoly that would be granted on polypropylene and polyethylene. Therefore, any disinvestment to Reliance would have to look long and hard at the competition implications.

As a result of the new plant at Jamnager, the Indian market has surplus capacity. It is expected to continue exporting similar quantities for several months. The recent commissioning of a 210,000t/yr polypropylene facility, brought on stream at Haldia by Haldia Petrochemicals, will further oversupply the Indian market and force more exports. The overcapacity of the Asian market has led to project cancellations in Indonesia, South Korea and Thailand.

However, according to Reliance, the compound annual growth rate of the Indian polypropylene market is about 20%. This would, if continued, soak up some of the extra capacity of Reliance and other companies. Nevertheless, the company must hope for an upturn in Far Eastern markets in order to revive demand. The immediate future of the market points to significant overcapacity.

In October 2005 plans were put in action to build a new refinery at the Jamnagar site adjacent to the existing refinery, which is costing $6bn. Part of the finance, $500m, has been guaranteed by the US Export-Import bank (Ex-Im Bank). The Ex-Im Bank guarantee is necessary to aid the refinery developer /owner Reliance Petroleum Ltd (RPL) to acquire the required US equipment, technology and services to build the new facility. The new refinery will be the world’s sixth largest and the two refineries will now comprise the largest refining complex in the world.

“The second refinery will have a capacity of 580,000 barrels per day, along with a 600MW power plant and enhanced port facilities.”

In January 2008 the project was declared 82% complete with a projected on-stream date of December 2008. The second refinery will have a capacity of 580,000 barrels per day, along with a 600MW power plant and enhanced port facilities.