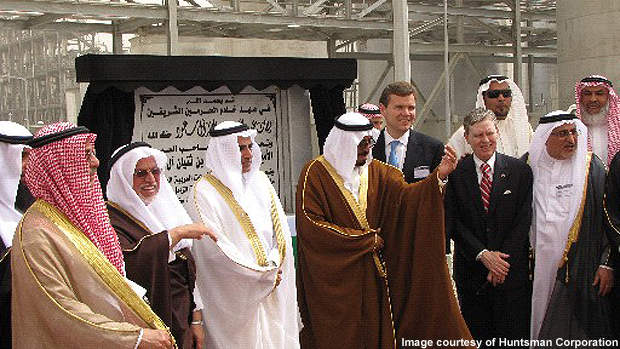 Opening ceremony of the Huntsman and Zamil Group ethyleneamines plant.

The new facility will manufacture a variety of ethyleneamines.

Ground breaking for the project took place in May 2008. 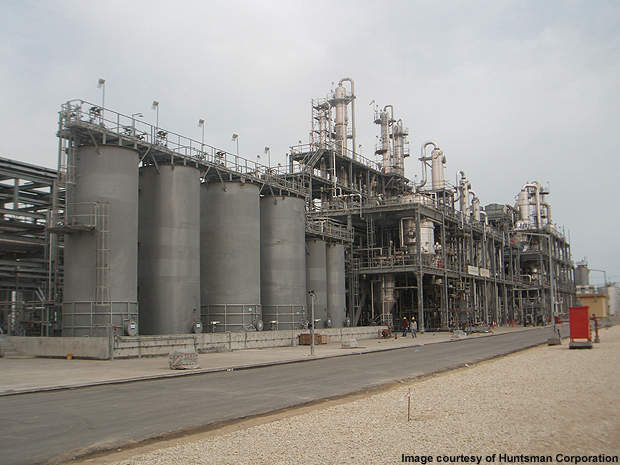 The JV was formally approved by the boards of both the companies in December 2007. The new plant was built at a cost of $289m and has a capacity of 27,000t/y of ethyleneamines.

The facility will manufacture a variety of ethyleneamines such as ethylenediamine (EDA), diethylenetriamine (DETA) and triethylenetetramine (TETA). It will also produce higher molecular weight varieties such as tetraethylenepentamine (TEPA), ethyleneamine E-100, aminoethylpiperazine (AEP) and piperazine.

Design and construction of the Huntsman and Zamil Group plant

Ground breaking for the project took place in May 2008. AAC invited bids for the main construction contract of the plant in June 2007. Four companies bid for the contract, including Taiwan-based CTCI, South Korea’s Hyundai Engineering & Construction Company (HEDC), and a JV of Aker Kvaerner and Sinopec.

Mechanical completion of the new plant was achieved in November 2009. The plant has been designed in such a way that another world-scale train can be included in the next few years. Addition of the second train will depend upon market conditions and will double the plant’s ethyleneamines capacity.

The technology involves a reaction between ethylene dichloride and ammonia.

“The technology involves a reaction between ethylene dichloride and ammonia.”

Following the reaction, the resulting compound is neutralised with sodium hydroxide to produce a mixture of ethyleneamines and sodium chloride.

The next step involves removal of the salt contained in the amine mixture. The final step is the separation of the individual amines using fractional distillation.

The feedstock required for the ethyleneamines plant will be supplied entirely by the companies operating in Jubail Industrial City. The ethylene dichloride (EDC) and caustic soda required by the plant will be sourced from the Saudi Arabia Petrochemical Company (SADAF).

Ammonia will be provided by Saudi Arabian Fertiliser Company (SAFCO). National Industrial Gases Company (GAS) will provide the nitrogen required by the plant.

Saudi Hollandi Bank provided funds amounting to $195m for the plant. The bank was the lead arranger and underwriter for the project. The transaction was carried out using the conventional Murabaha and Ijara techniques of Islamic financing. The Murabaha technique is a deal in which a commodity is sold at a higher price for profit and the Ijara technique is a lease-based structure.

“With the completion of the plant, Huntsman is expected to become one of the biggest manufacturers of ethyleneamines in the world.”

In November 2006, Huntsman and Zamil appointed Jacobs Engineering as the project management consultant for the new plant. Jacobs won the second contract to carry out front-end engineering and design (FEED) for the project in March 2007.

In December 2007, HEDC was chosen as the Engineering, Procurement and Construction (EPC) contractor for the project. HEDC executed the project in partnership with South Korean builder Hanwha Engineering & Construction.

The new plant was built to take advantage of the growing demand for ethyleneamines in Asia. Ethyleneamines have a number of end-use applications. They are used in the production of the paper resins, wet strength resins, epoxy curing agents, chelants and lube oils additives for gasoline and diesel engines. They are also used in agricultural applications as fungicides and in laundry detergents.

With the completion of the plant, Huntsman is expected to become one of the biggest manufacturers of ethyleneamines in the world. Huntsman will sell and market the plant’s output. AAC is planning to sell its output mostly in Asia and also across the world.