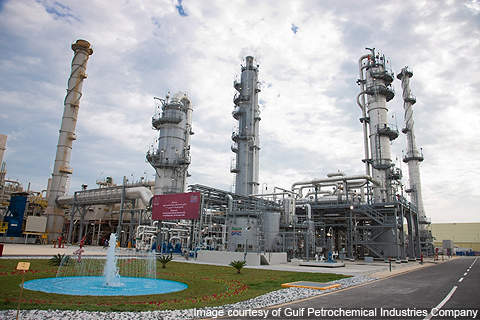 GPIC's new facility has the capacity to produce 450t a day of carbon dioxide (CO<span class="sub">2</span>). 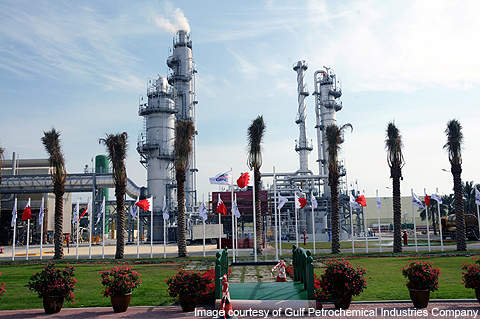 GPIC came up with the CDR project in 2006 to increase the production capacity of its methanol and urea plants. 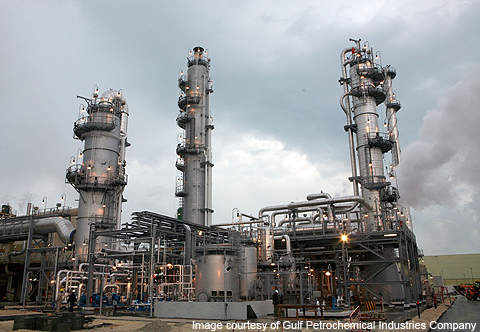 The carbon dioxide recovery facility is fitted with its own incinerator for the treatment and disposal of reclaimed waste produced in the plant. 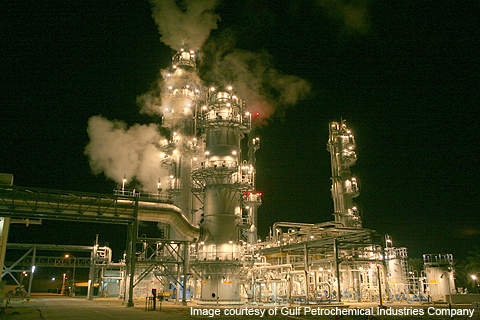 CO<span class="sub">2</span> recovery starts with the feeding of the flue gas from the methanol stack at 206&#176C into the CDR unit.

Gulf Petrochemical Industries Company’s (GPIC) carbon dioxide recovery (CDR) plant is the first such plant to be built in Bahrain. The facility was inaugurated in January 2010 following a 27-month fast track construction schedule. Located in Sitra Island, the new facility has the capacity to produce 450t of carbon dioxide (CO2) a day. GPIC invested $52m in the construction of the plant.

Construction of the new plant is expected to increase GPIC’s production capacity of methanol by 120t a day and urea by 80t a day. In association with Abu Dhabi Future Energy Company (Masdar), GPIC is planning to register with the UN’s clean development programme. Masdar will manage the registration process for the programme, under which GPIC will be able to earn carbon emissions reduction certificates.

GPIC came up with the CDR project in 2006 to increase the production capacity of its methanol and urea plants. A feasibility study was conducted to examine the technical and economical benefits of the project. Finally a cost benefit analysis was carried out, which revealed that favourable returns could be expected from the project.

“Gulf Petrochemical Industries Company’s (GPIC) carbon dioxide recovery (CDR) plant is the first such plant to be built in Bahrain.”

Construction of the new plant began in August 2008. By January 2009, installation of the CDR columns was complete. In November 2009, mechanical completion of the plant was achieved and by December 2009 CO2 production had begun.

CO2 recovery starts with the feeding of flue gas from the methanol stack at 206°C into the CDR unit.

The flue gas is then treated with caustic soda to remove the sulphur oxide. About 355kg/d of SOx is generated from the flue gas during this stage. The flue gas is then compressed using a bowler and moved to a two-bed CO2 absorber. The absorber has a structured packing to absorb the gases. The bottom bed is used for absorbing CO2 and the top bed for treating the exhaust gases.

“GPIC is planning to register with the UN’s clean development programme.”

A special solvent called KS-1 is fed from the top of the section to absorb the CO2. The remaining gases from the flue gas are treated and released into the atmosphere.

The plant has its own incinerator for the treatment and disposal of reclaimed waste from the plant. Safety tests conducted by the contractors showed that the residue generated from combustion in the incinerator was safe to be released into the atmosphere.

The process technology used at the new plant was jointly developed by Mitsubishi Heavy Industries (MHI) and Kansai Electric Power Company. The process is called the Kansai-Mitsubishi Carbon Dioxide Recovery Process (KM CDR Process) and can recover about 90% of CO2 present in flue gas. A key feature of the technology is that it requires lower energy compared to other technologies.

GPIC awarded the technology licences and basic engineering contract worth $2.1m to MHI. The main engineering, procurement and construction (EPC) contractor for the project was Tecnimont ICB (TICB) of Italy. The TICB contract was worth $44.85m. Both the contracts were signed in October 2007.

The subcontractor for the project was Bahrain’s Mechanical Contracting & Services Company. The incinerator of the CDR unit was designed and built by Japan’s Tsukishima Kankyo Engineering and the three columns of the unit were manufactured by AMC of Malaysia. The columns are 4.5m in diameter and 50m in length and were fabricated as single pieces. They were transported to the site using a cargo ship.