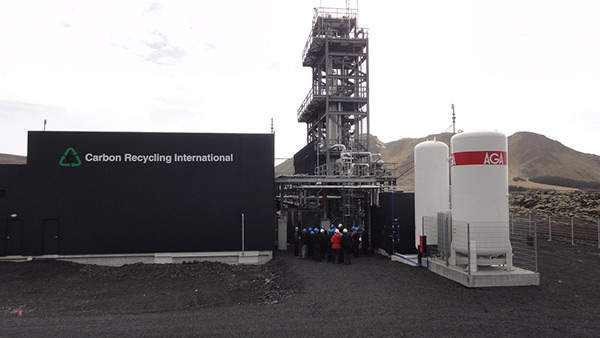 The Svartsengi renewable methanol plant has a modular design. Image courtesy of Thinkgeoenergy.

The Svartsengi carbon dioxide to renewable methanol plant has a capacity to produce about five million litres per annum. Image courtesy of Thinkgeoenergy.

The plant is located in Grindavik, Reykjanes, Iceland. Image courtesy of Thinkgeoenergy. 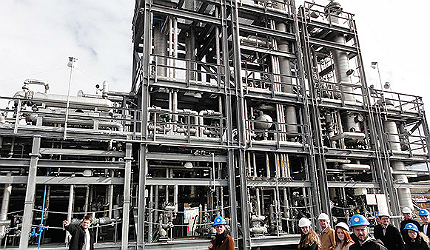 George Olah carbon dioxide (CO2) to renewable methanol plant is located at the Svartsengi geothermal power station in the town of Grindavik in Reykjanes, Iceland.

The facility was developed at a cost of ISK1bn ($8m). Renewable methanol (RM) is a synthetic liquid fuel used as gasoline blends to meet the renewable energy directives.

The construction of the George Olah renewable methanol plant was started in October 2009 and commissioning took place in late 2011. The plant was officially opened in April 2012.

It is named in the honour of the Nobel laureate in chemistry George Olah. The plant is owned by Carbon Recycling International (CRI). It is jointly operated by HS Orka and CRI.

The current EU/EEA fuel quality regulations in Iceland allow mixing of up to three percent methanol with gasoline fuel in automotive vehicles for transportation. The country is expected to allow about ten percent fuel blends from renewable sources by 2020.

"The patented ETL process uses CO2 and hydrogen as feedstock and converts them into renewable methanol, with oxygen as the only byproduct."

Iceland is well suited for RM production due to the abundant resource of geothermal power, which accounts for about 25% of the electricity generation in the country. When compared to standard fuel, CRI’s RM is expected to reduce greenhouse gas emissions by about 75%.

CRI has been operating a pilot facility for testing the ETL technology in Iceland since August 2007. It converts CO2 to liquid fuels and has a capacity of 50,000 litres a year. George Olah facility is the first commercial plant based on the ETL technology. It will provide operational experience and improve the plant economics to pave the way for building larger plants.

The facility will also validate the logistics and distribution of the methanol product across the EU and Iceland. The standard commercial scale facilities will have a capacity of 50 million litres a year and are planned to be built across the globe.

Conventional biodiesel and ethanol fuels are produced from agricultural resources and fossil fuels. Renewable methanol does not lead to high costs as it is independent of fossil fuel-based production.

The RM is also reproducible in similar geothermal production sites worldwide. The energy can also be sourced from renewable resources such as wind, geothermal energy, solar and hydro power.

The patented ETL process uses CO2 and hydrogen as feedstock and converts them into renewable methanol, with oxygen as the only byproduct.

The CO2 is captured from the Svartsengi geothermal power station. It also supplies power for the electrolysis of water to produce hydrogen. The H2 and CO2 are reacted, to produce methanol. The electrochemical process occurs at low temperatures and low pressure.

The renewable methanol production facility requires about five megawatts of power generation capacity equivalent per annum. The ETL technology requires a modular construction and can be implemented at the site in phases.

The technology has been proven successful in storage of the energy, CO2 reduction and fuel transportation.

The George Olah renewable methanol plant was designed by Mannvit Engineering. The company was also responsible for the project management services. HS Orka is the primary feedstock supplier for the plant.

The municipality of Grindavik and Jacobs Engineering collaborated for the project. CRI has also partnered with Innovation Center Iceland for the development of technology and availing grants.

Iceland Oil is responsible for sales of the renewable methanol under a long-term contract with CRI.