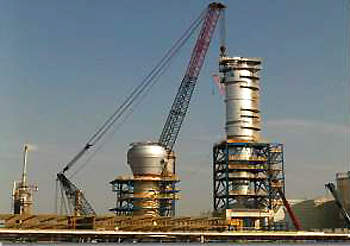 DSM acquired its petrochemical facilities at the Gelsenkirchen site through acquisition of what was then known as Vestolen, from Veba Oel in 1997. Despite the change of ownership, the Veba facilities at Gelsenkirchen remain important in supplying the expanding DSM plant with feedstock. The plant is one of Europe’s biggest single-train alpha olefin plants.

Construction at the German chemicals site began in 1999, although the construction contract was awarded in 1998. The polyethylene project started up in mid 2000. The polypropylene plant started production in the first half of 2000. The cost of all the new investment in Gelsenkirchen was Guilder 1bn ($431m).

The plant has a polyethylene capacity of 300,000t/yr, and gets most of its feedstock from the ethylene production facilities on the same site. If these prove inadequate, the company plans to import ethylene from its Dutch ethylene facilities in Geleen. The polypropylene plant has a capacity of 250,000t/yr.

A far more long-term possibility is that the company could import olefins from the previous owner of the plant, Veba Oel. Ethylene supplies would have to double to 340,000t/yr and propylene supplies go up to 375,000t/yr.

In order to guarantee the supply of these quantities, Ruhr Oel GmbH (a joint venture between Veba Oel and PDVSA in Venezuela) would expand its olefins plant 4 by 100,000t/yr of ethylene and 55,000t/yr of propylene. This would demand an investment of DM100m ($47.8m) by the joint venture.

However, the contract was also awarded partly on the grounds that it would offer an opportunity to use new technologies, such as EXXPOL metallocenes and super-condensed-mode process enhancement, as well as because of the merits of UNIPOL process technology. Univation Technologies is a joint venture between ExxonMobil and Union Carbide (now part of Dow Chemical).

“The contract makes DSM into the 48th licensee of the UNIPOL process.”

Actual construction was undertaken by Kvaerner Process. This construction contract was awarded to the Norwegian company in 1998.

DSM Poliolefine GmbH is a part of the Netherlands-based DSM group, which is one of Europe’s major polyolefin manufacturers. The investment is part of a wider investment in European production sites that DSM is undertaking.

The opening or expansion of this and other new production plants in Europe has had the unintentional effect of frustrating efforts by polyethylene producers to increase prices. Some of this was caused by capacity expansion, although some of the downward price pressure was the result of a falling off of Asian demand, as the region’s economy got into difficulty.

According to DSM, the expansion at Gelsenkirchen has completed the company’s LLDPE position. DSM believes it is already very strong in LDPE, based on the Heerlen based company’s own tubular technology.