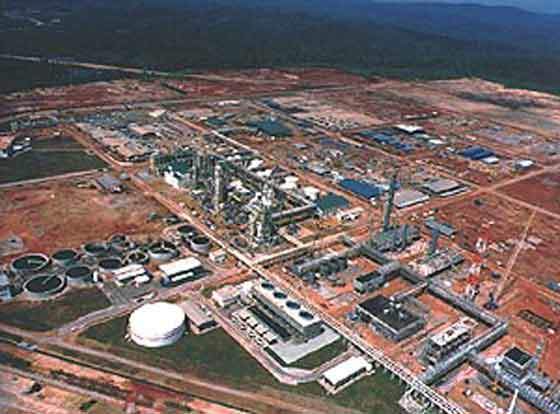 BASF Petronas Chemicals Sdn Bhd is putting together an huge petrochemical complex in Gebeng in Malaysia. The complex will include a butanediol facility, an acrylic acid facility, a cracker facility and a formic acid facility. Facilities are under construction for the manufacture of oxo alcohols (250,000t/yr), phthalic acid, phthalic anhydride (40,000t/yr) and softening agents (100,000t/yr). The entire project is said to cost Malaysian Ringgit 2.5 billion.

The acrylic acid plant in Gebeng came into production in March 2000. It will produce 160,000t/yr of acrylic acid. The plant has achieved more than three million man hours without a lost time accident.

The company has decided to build a 100,000t/yr butanediol facility at Gebeng, in Malaysia’s eastern state of Pahang. It plans to begin butanediol production in 2002. The site is also being used for oxo-alcohols and acrylic acid facilities.

In early 2000, it was announced that a new cracker could be constructed in Kuantan, in Malaysia. The cracker plant will produce petrochemical products including ethylene, propylene and mixed hydrocarbons, such as butane, for further downstream manufacturing activities. This will be a useful addition to the entire complex in terms of economies of scale. Indeed, BASF, like many chemical conglomerates, sees integration as a key way to achieve the cost saving necessary for future competitiveness.

BASF Petronas also decided to build a formic acid facility at the Kuantan site. The complex includes production facilities for acrylic acid, acrylic ester, oxo alcohols, phthalic anhydride and softening agents and will gradually move to production from 2002. This will begin with 50,000t/yr of formic acid. The formic acid production will complement existing BASF production in Germany, and is intended primarily for the Far East market. BASF is also building a facility in China.

BASF Petronas Chemicals Sdn Bhd is a joint venture that is 60% owned by BASF and 40% owned by Petronas. It was set up in 1997 to pursue petrochemical opportunities in Malaysia. The joint venture is well placed to do this since it benefits from BASF’s general expertise and Petronas’ local knowledge. Petronas is Malaysia’s state-owned petroleum company. BASF is a large German-based chemicals manufacturer currently expanding in the Far Eastern market, which is expected to be the focus of future growth. As well as its joint venture with Petronas, BASF has its own plants in Malaysia to manufacture polystyrene and a superplasticizer called tamol. Malaysia also houses some BASF research activity. Petronas’ 14,500 staff are engaged in oil exploration, production and refining as well as petrochemical production.

Despite the Asian crisis, Petronas is pursuing a policy of aggressive expansion. This involves attracting foreign investors to provide about half the money. The attainment of this goal is likely to be adversely affected if Malaysia’s exchange rate controls become a permanent feature, although their temporary imposition does not seem to have had a damaging effect. In the case of the integrated petrochemical plant at Kuantan, the entire plant might cost just under $1 billion.

Malaysia has so far been relatively untouched by the general crisis in East Asia. The government imposed a series of exchange controls and anti-import measures, which have given the local economy some shelter from the surrounding storm. Thus, the country has retained good GDP growth, which is fast outpaced by the growth in chemicals industry investment. The Far East is widely expected to see a strong upswing in chemicals demand as the regional economy recovers from the effects of the Asian crisis.

The Malaysian Industrial Development Agency (MIDA) gives further incentives to develop in the country. These include R&D grants, training grants and low rents. The centre of Malaysia’s petrochemical development is on the east coast of the Malaysian peninsula in Terengganu, between Kertih and the Gebeng industrial development zones near Kuantan. The new complex is right at the centre of this area. The 1997 crisis brought on a series of restrictions on foreign investors. However, this does not appear to have affected the BASF/Petronas petrochemical development.