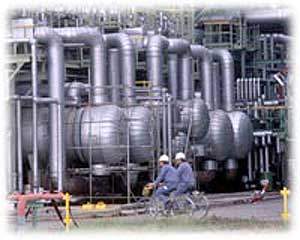 The presence of a local manufacturing site will provide a major advantage in the reduction of transport costs.

The project is a major petrochemical complex located on Jurong Island. The decision to go ahead with a $2 billion petrochemical complex was made at the height of the Asian crisis, making it a major act of faith by Exxon Chemical. The plant was commissioned in July 2001 and has utilised the most up-to-date integration technologies for manufacturing.

The oxo alcohol plant will produce isononyl alcohol (INA) using proprietary Exxon technology, and will be capable of producing an expanded grade slate. The oxo alcohol output will be sold as feedstock for plasticisers.

The Singapore Chemical complex was ordered in the middle of 1997. The new petrochemical plant complex will produce 800,000t/yr of ethylene. In addition, it will make 400,000t/yr of propylene and 200,000t/yr of butadiene.

The site has four plants centring around the 800,000t/yr steam cracker, which was successfully installed in the first half of February 2000. Each of the four furnace modules contains two furnaces and weighs around 2,000t, making them among the heaviest in the world. They were constructed abroad for assembly in Singapore in order to reduce the time necessary to complete the project. They are used to break down the heavy oils and naphtha from the refinery, which is the basis of the derivative petrochemicals.

Exxon Chemical Singapore also installed three downstream plants with capacities of 480,000t/yr of polyethylene, 315,000t/yr of polypropylene and 150,000t/yr of oxo-alcohol, and a 155MW cogeneration unit. The site power utility will use cogeneration as a production technique. These three plants were earmarked for around 60% of the new cracker’s output.

As the plant is in the middle of an industrial estate, based on a number of islands off the coast of Singapore, Exxon Chemicals Singapore will be able to sell much of the output to the neighbouring facilities. The propylene and ethylene is expected to be used as feedstock by other Exxon Chemical plants or sold to neighbouring facilities owned by other companies. The rest of the production will be marketed around Asia.

Although Exxon Chemicals Singapore is already the number-one supplier of oxo alcohols for plasticisers, it previously had to import the product from outside Asia. The presence of a local manufacturing site will provide a major advantage in the reduction of transport costs. Exxon Chemicals Singapore believes that the regional demand for plasticisers is rapidly growing for uses, such as floor coverings, wire and cable insulation, automotive applications and medical products.

The main contractors were M W Kellogg and Japan’s Chiyoda. These are the engineering, procurement and construction (EPC) companies for the first three plants. The two companies formed a Kellogg-Chiyoda ethylene technology alliance in 1996, which was no doubt an important factor in winning the Singapore contract.

Formerly part of Dresser Industries, M W Kellogg is now part of Kellogg Brown & Root, a unit of Halliburton. Chiyoda is a Japanese contractor with 20 years of experience in the region.

Other contractors include W.A.Bechtel, who performed the design, engineering, procurement and construction of the polyethylene plant together with the finishing, packaging and shipping. Brown and Root provided major infrastructure work, Honeywell provided the control systems, and several buildings were constructed by other contractors. The Polypropylene Plant was built by Mitsui.