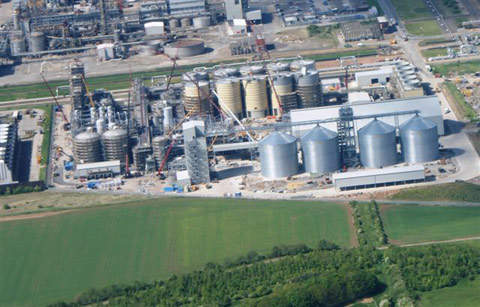 Ensus is building the UK's first ever bioethanol plant in Teesside. 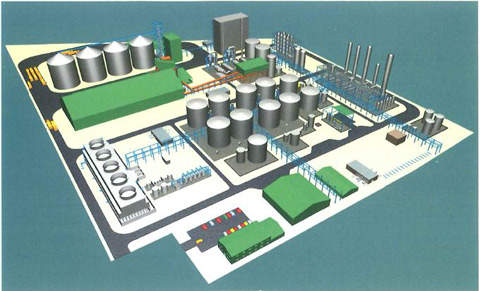 Diagrammatic view of the Ensus plant. 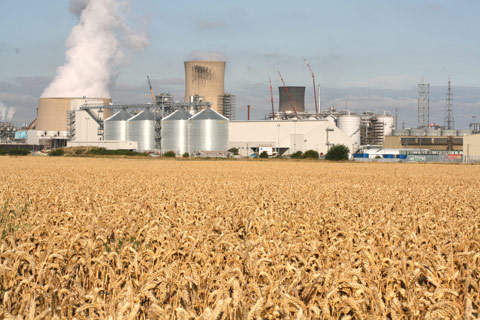 The Ensus plant is expected to generate 70% of carbon savings compared to fossil fuel use. 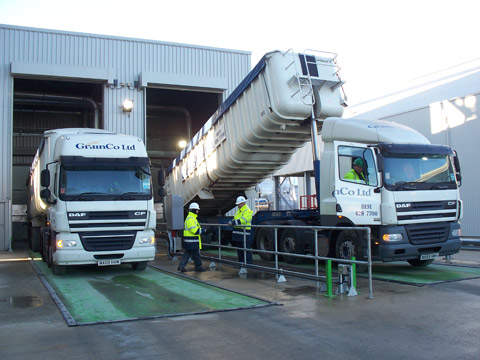 The first 5,000t of wheat was delivered in December 2009, prior to the plant beginning production. 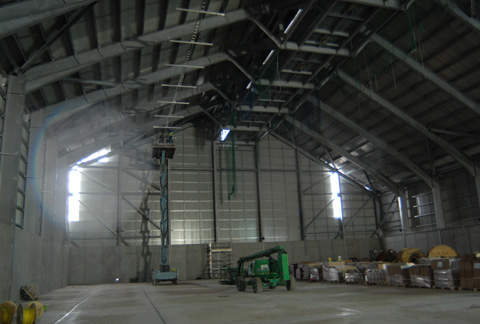 A third of the plant's output will be used for fuel, with the remainder going towards animal feed. 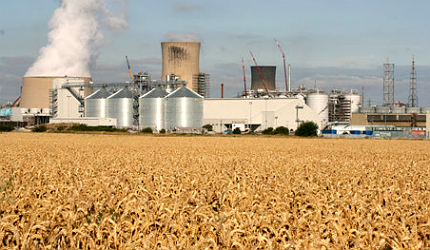 Ensus, the UK’s largest bioethanol company based in Yarm near Middlesbrough, built the country’s first ever bioethanol plant in February 2010. The plant was constructed in the Wilton International industrial park in Teesside, UK.

The 12ha site of the plant was formerly occupied by chemicals giant ICI. Conceptualised in 2006, the plant was built for a total cost of £250m.

The plant produces 400 million litres of bioethanol and 350kt of high-protein animal feed or dried distillers grains with solubles (DDGS). The bioethanol produced is used along with gasoline. The conversion process of the bioethanol plant generates about 350kt of DDGS and 300kt of carbon dioxide.

"The plant is expected to generate 70% of carbon savings compared to fossil fuel use; this translates into removing 300,000 cars from the road."

In addition, the plant produces 25MW of surplus electrical power for exportation as a result of the high level of energy integration carried out at the plant.

By the end of 2009, Ensus was carrying out the final commissioning of the plant and production was started a few weeks later. In December 2009, the plant took the first intake of 5,000t of wheat in preparation for starting production. The plant has a capacity to store 30,000t (ten-day supply) of grain and 7,000t of DDGS.

About 100 people are employed at the plant. It also generated 2,000 indirect jobs in farming to grow wheat and in the distribution supply chain. Construction of the plant triggered about £60m worth of investments in the associated facilities.

The plant is expected to generate 70% of carbon savings compared to fossil fuel use; this translates into removing 300,000 cars from the road.

Considering the increasing demand for bioethanol, Ensus had plans to build a second bioethanol plant in Teesside or in Northern Europe. In May 2011, the company however stated that the Wilton plant would be closed for about four months due to an increase in global feedstock prices and competition from the US, as well as the decrease in demand for ethanol.

In August 2012, Ensus announced that it will restart the plant during the month after a 15-month shutdown. The decision was taken after the European Union’s Customs Code Committee closed the loophole in the tariff system, which enabled subsidised ethanol from the US to enter the European market. The plant will be fully operational within two months following start-up.

The groundbreaking ceremony for the bioethanol plant took place in May 2007. By September 2007, the site was cleared and piling work for the foundation was completed. Civil work also began a few weeks later. Pre-cast bases were erected in April 2008 and work on the fermenter area began. Steelwork for the pipe bridge also neared completion, and fixing of the pipe into the modular bridge sections started.

"Ensus signed a ten-year supply agreement with Royal Dutch Shell to purchase the bioethanol produced by the plant."

The big lifts started towards the end of April 2008. By August 2008, civil works related to the grain reception facilities and the fermentation tanks were undertaken. Installation of the pipe work into the pipe bridges was also carried out. Delivery of all the major equipment required for the plant had also begun.

Foam concrete works started in November 2008. Foam concrete was used as a support medium for the cone bottoms of the steel tanks which were fabricated at the site. The foam was filled in the tanks to supply a uniform load-bearing layer between the cone bottom of the tanks and the concrete foundation. The plant has about 14 such tanks, which carry bioethanol including fermenters and beerwells.

Foam concrete mix of about 1-1,800kg/m² with a 28-day durability of 1.5kg was used at the plant. When pouring of the foam concrete was started, there were load bearing issues due to which it was decided that the tanks would be filled at only 700mm/d.

About 3,600t of steel, cranes with a lifting capacity of 750t and 55,000m² of concrete was used to construct the plant. Materials for constructing various facilities, such as cooling towers, undercover stores, a distillation plant with related heat exchangers, a fermentation plant and electrical substations were obtained from across the world, including Belgium, Ireland, Spain and the US.

Construction of the Ensus bioethanol plant was funded by both private investments and grants from the government. Private equity firms, the Carlyle Group and Riverstone, invested £90m in the project. The project also received a government grant of £1.9m from regional development agency One North East. Ensus received another £150m in debt provided by the Royal Bank of Scotland, Société Générale and Calyon.

"The technology used in the plant is licensed from Katzen, a company that provides technology for bioethanol processes."

The main contractor of the plant was Simon Carves, which is part of the Punj Lloyd Group. Simon Carves was involved in the project since its conceptualisation and carried out the initial front end engineering design. In April 2007, it embarked on the engineering, procurement and construction of the plant. The company employed about 800 people for the purpose.

Simon Carves contracted Harry Peers Steelwork to carry out the design, fabrication and erection of the modular piperacks, distillation plant, DDGS plant and other facilities. The contract awarded to Harry Peers was worth £6m.

Ensus contracted Glencore Grain UK to satisfy all of the grain requirements of the plant. Glencore handles and markets wheat, barley, oilseeds and rice and exports them to the EU, Ukraine, Kazakhstan and Australia. Glencore also handles the transport and distribution of the DDGS produced at the plant.

Vopak, a leading independent tank terminal operator, provided its specialised bioethanol storage and handling facilities for the new plant. The company built eight tanks with a total capacity of 40,000 cubic metres at the plant.

Sembcorp, a leading provider of utilities, provided the facility with low-carbon heat and power and other necessary utilities and services.

Sales contracts with Shell and Yara

Ensus signed a ten-year supply agreement with Royal Dutch Shell to purchase the bioethanol produced by the plant. The company mixes the bioethanol with petrol to sell it as transport fuel. The contract is expected to help Shell fulfil its renewable fuels obligations.

Process technology at the bioethanol facility

The technology used in the plant is licensed from Katzen, a company that provides technology for bioethanol processes. Katzen’s technology is employed in more than 35 countries. The technology enables the plant to produce 400 million litres of bioethanol through a 72hr conversion process. The processes at the bioethanol plant are designed in such a way that the entire output, either food or fuel, is fully utilised. Two thirds of the plant’s output goes out as animal feed, and a third as biofuel.

The bioethanol plant utilises about 1mt/y of wheat to produce bioethanol. Other feedstock, such as maize, barley, corn or sugar beet can also be used at the plant. Wheat was chosen as the primary feedstock due to a surplus in Europe. Construction of the plant provided farmers in the United Kingdom with an assured market for wheat.

The Ensus bioethanol plant contains 30km of pipe work, which includes 8.5km of ethanol product export lines. It also includes 220km of electrical cabling and 130km of instrument cabling. About 2,000 instruments and 2,500 valves are installed at the plant.

Bioethanol represents about 80% of the biofuel production globally. The importance of bioethanol has been increasing with the need to reduce greenhouse gas emissions. The EU has set a binding renewable energy target for 2020, which outlines that 20% of the total energy supply should be from renewables. To achieve this target about ten percent of transport energy will have to come from renewable sources such as bioethanol.

In addition, according to the Renewable Transport Fuels Obligation of the UK, gasoline and diesel were required to contain about 3.5% of biofuels from April 2010 to April 2011, rising 0.5% year-on year until April 2013 to April 2014, when the figure will increase to five percent. Ensus’s bioethanol plant is expected to supply about 35% of the bioethanol required to meet the UK Government’s targeted substitution requirements.

The DDGS produced at the plant can be used as substitutes for soy bean and corn gluten feed in the UK and Europe. There is a substantial deficit of this kind of feed in the EU, which requires the region to import about 35mt of soya primarily from Brazil and Argentina. The Ensus plant fills this deficit and also helps in protecting carbon-rich land, such as rainforests, where the soy bean is primarily grown.

INEOS Bio is planning a bioethanol plant which will use waste as its feedstock, the first of its kind in Europe. The plant will be located at Seal Sands in the Tees Valley, UK.

BP, the former owner of the integrated petrochemical plant and refinery complex in Grangemouth, Scotland, expanded its petrochemicals facilities in 2002.