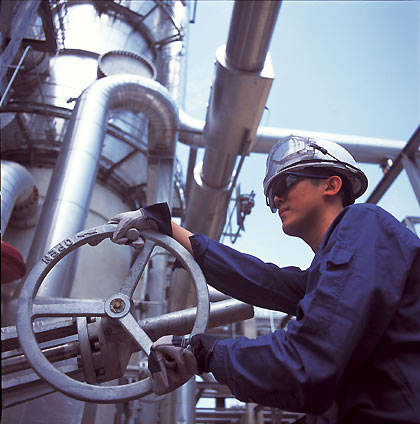 Singapore is the main centre for the Shell Group's petrochemicals operations in Asia Pacific. Among the many assets operated there is the styrene monomer/propylene oxide plant owned by Ellba Eastern, a 50:50 joint venture between Shell and BASF. 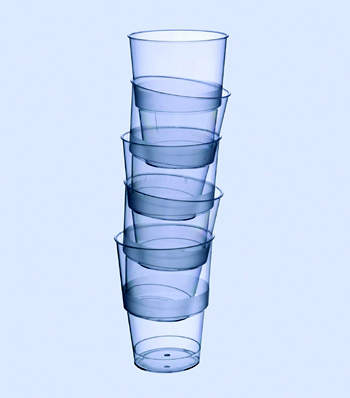 Uses of styrene monomer (SM): lightweight drinks cups, which are made of crystal polystyrene, are among the many everyday objects derived from styrene. Shell chemicals companies are among the world's leading styrene manufacturers. (photos courtesy of Shell Chemicals)

The chemical process for the polymerisation of propylene oxide, one of the products generated at the plant.

Ellba Eastern has established a world-scale styrene monomer (SM)/propylene oxide (PO) (SM/PO) production plant located in Seraya, Jurong Island, Singapore. The plant went into operation in July 2002 and was officially opened on the 27 September 2002. The plant was designed with a production capacity of 250,000t/yr of polypropylene oxide (PO) and 550,000t/yr of styrene monomer (SM).

The facility, which is said to be the largest of its kind in Asia, required an investment of $500m to develop and construct. The plant is actually situated on the site of another Shell complex in Jurong Island (Shell Chemicals Seraya Pte Ltd).

PARTNERS IN THE SM/PO PLANT PROJECT

Ellba Eastern is a joint venture company in which Shell Seraya Pioneer Ltd, a subsidiary of Shell Eastern Petroleum and BASF South East Asia, a subsidiary of BASF, each hold a 50% stake. The venture was established in 1999.

“The investment is said to represent BASF’s first manufacturing investment in Singapore.”

The investment is said to represent BASF’s first manufacturing investment in Singapore. Shell has been a major long-term investor in Singapore with a number of plants in operation. The new SM/PO plant is operated by Seraya Chemicals, which is now a wholly owned Shell company. BASF and Shell are also partners in a similar PO/SM complex located in The Netherlands at Moerdijk.

The decision to invest in the SM/PO production plant was taken in 1998/1999, during the middle of Asia’s economic downturn. Ground was broken in January 2000, which Shell Chemicals claimed made the construction the first major project to be launched in Singapore in the new millennium.

Shell’s proprietary SM/PO technology is in use on the plant. The process involves four major steps and takes place in a closed system that allows waste products and heat to be reused. Shell claims that one unique design feature of the process is the handling of wastewater. This feature involves evaporative concentration of the volatile components before incinerating them. Shell says that the technology allowed it to make a major economic contribution while, at same time, minimising the impact on the environment.

This SM/PO technology route has been adopted by over a third of all new PO production plants worldwide. The styrene monomer produced by the process is actually an unwanted by-product in some cases and for plants not requiring SM there are alternative technologies (direct oxidation, however, is not a viable process).

The technology is a fourth-generation process that has incorporated improvements in the catalytic steps and increases the yield of both PO and SM. The process reduces energy consumption by around 20% and is actually 5–10% cheaper to run than previous processes.

During the year 1999/2000 a joint venture between ABB Lummus Global, and Japan’s JGC was awarded a contract for the engineering, procurement and construction of the SM and PO plant. The contract also included construction of utility offsite facilities. The construction project was completed eight weeks ahead of schedule and 11% below budget.

The plant benefits from Jurong Island’s integrated chemical hub and sources the majority of its raw material from a nearby cracker.

Ellba Eastern is said to be a strategically important as demand for SM and PO is expected to grow as use of polystyrene and polyurethane, materials that require SM and PO respectively for their production, will grow up to 10% a year in Asia.

“The construction project was completed eight weeks ahead of schedule and 11% below budget.”

Each partner will independently market its share of the material. BASF uses the PO to produce polyols for the Asian market and uses the styrene monomer at its own Asian plants to support production.

PO is used in the production of a number of derivatives including polyols, polyurethanes, propylene glycol and glycol ether solvents. SM is the starting material for polystyrene, acrylonitrile butadiene-styrene (ABS) and styrene-acrylonitrile (SAN).

Singapore’s Jurong Island is an integrated chemical hub benefiting from a strong logistics infrastructure. It is home to a number of major global chemical producers. Jurong Island is also said to benefit from economies of scale and its proximity to growing Asian markets. The area is becoming the base for more and more chemical and integrated petrochemical plants.