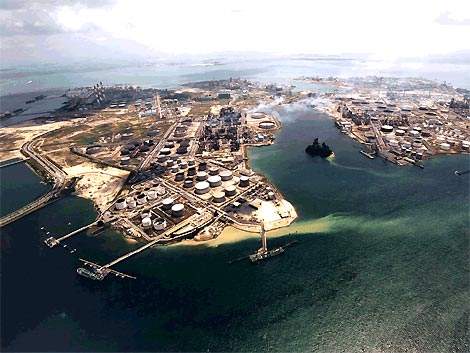 Jurong Island is at the centre of a petrochemical cluster that the Singaporean government has been attempting to encourage, in order to exploit these opportunities. The presence of many chemicals companies at the site has become self-reinforcing, as the cluster has gained critical mass and been able to exploit mutual synergies between the constituent plants.

With the opening of the Jurong Island plant, Croda has expanded its product portfolio to include alkoxylates, which means the use of certain key petrochemical raw materials, such as ethylene oxide and propylene oxide. The new plant was ordered in 1998, and was brought on stream in early 2000. The cost of the project was Singaporean $50 million ($29 million). The new plant can produce 15,000t/yr of speciality esters and 15,000t/yr of speciality alkoxylates in liquid and solid form. Raw materials come from Ethylene Glycols Pte Ltd, which supplies ethylene oxide by pipeline, and Seraya Chemicals, which supplies propylene oxide. The presence of these companies, also at the Jurong Island site, was an important factor in the decision to invest there, as the Croda is keen to have a cheap and secure source of feedstock that the numerous chemicals plants on Jurong Island can amply supply. Nevertheless, the decision to invest was no doubt also influenced by the presence of an existing plant. The new plant approximately quintuples the previous plant’s size.

Although the fine chemicals plant is much bigger than its predecessor, it has been designed with an ambitious margin for future expansion. According to Croda, the infrastructure at the site could support a manufacturing facility twice the size. This is an impressive testament to the extent of the company’s expectations of future growth for the local and regional market. It was suggested by a company executive that it may invest an additional Singaporean $25 million ($14.4 million) by around 2005.

Croda International, which has its headquarters in the UK, first started manufacturing speciality esters in Singapore in 1990. The opening of the new plant makes Croda the first manufacturer of speciality alkoxylates in South-East Asia. The end markets of the plant’s production are mainly products for personal care, households, food and pharmaceuticals.

Croda has reduced its exposure to European markets, as it increases its exposure to markets in the Far East. This strategy follows the widely perceived shift in the centre of gravity of demand in world chemicals markets, to the Far East. The rapid economic growth of the Asian market as it recovers from the collapse of 1997/1998 is feeding a growing demand for chemicals of all sorts.