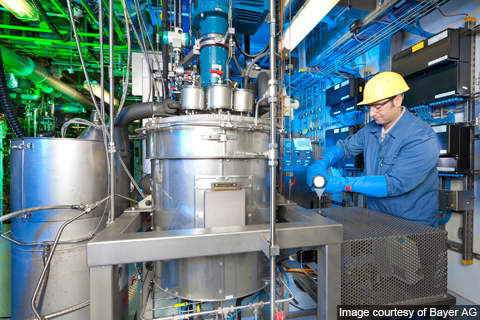 The pilot plant will test a new catalysis technology for production of polyether polycarbonate polyols. 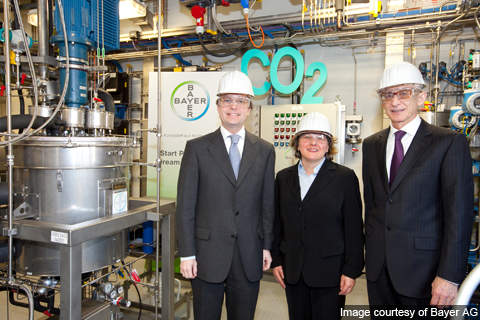 The pilot plant was started in February 2011. 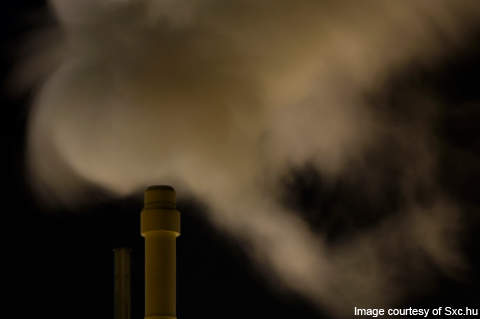 RWE Power will supply CO<span class="sub">2</span> for the pilot plant.

In February 2011, Bayer MaterialScience started a new pilot plant at Chempark Leverkusen, North Rhine-Westphalia state of Germany for producing plastics from carbon dioxide (CO2). It will be used to develop polyurethanes from the waste gas released during power generation.

The Leverkusen pilot plant will test a new process technology on technical scale for producing raw material of polyurethane. The production will be on a kilograms scale. If the testing phase is successful, it will be extended to commercial production on an industrial scale in 2015.

“The pilot plant was designed and built by Bayer Technology Services.”

A suitable catalyst for the use of CO2 was not available for four decades. The proprietary technology developed by the scientists of Bayer and CAT uses the gas efficiently. It was developed as part of the Dream Reactions project which began in 2009. It was the forerunner of Dream Productions. The project received funds from the German Federal Ministry of Education and Research (BMBF).

The CO2 thus acts as a substitute for the petroleum production of plastics. Polyurethanes are used to produce a wide range of everyday applications. When they are used for the insulation of buildings, the polyurethane saves about 80% more energy than it consumes during production. Light weight polymers are used in the automotive industry, upholstered furniture and mattress manufacturing.

Polyurethanes are formed by reacting two monomer units of isocyanates (polymerics isocyanate or diisocyanates) and polyols. The reaction takes place in the presence of specific quantities of catalyst and additives under predetermined conditions.

The waste carbon dioxide gas is recycled and used as a raw material in the pilot plant. It produces polyether polycarbonate polyols (PPPs), the chemical precursor which is processed into polyurethanes.

“Bayer MaterialScience is conducting tests on the polyols at one of its existing plants.”

Bayer MaterialScience is conducting tests on the polyols at one of its existing plants for polyurethane production. It will be mainly used to produce rigid and soft foam products.

Researchers at the CAT Catalysis Center in collaboration with RWE Power are testing the compatibility of the catalyst with CO2. The RWTH Aachen University researchers are improving the ecological and economical aspects of the process by conducting tests with conventional products and processes.

The CO2 feedstock for the pilot plant will be supplied from a lignite power plant in Niederaussem, operated by RWE Power. The Niederaussem Coal Innovation Center at the plant, also operated by the utility company, has a CO2 scrubbing system for separating it from flue gases.

In 2007, the three collaborators agreed to conduct intensive research on catalysis for five years through the CAT Catalytic Centre. The Dream Production project is funded by BMS with €6.05m and by Bayer Technology Services with €1.25m. RWTH Aachen University and the State of North Rhine-Westphalia contributed €2.7m for the programme. The government is contributing about €5m for the Dream Production.

The pilot plant was designed and built by Bayer Technology Services. It was responsible for the plant commissioning and start up of the plant. It will also operate the facility. The Dream Production project is supervised by the German Aerospace Center (DLR).