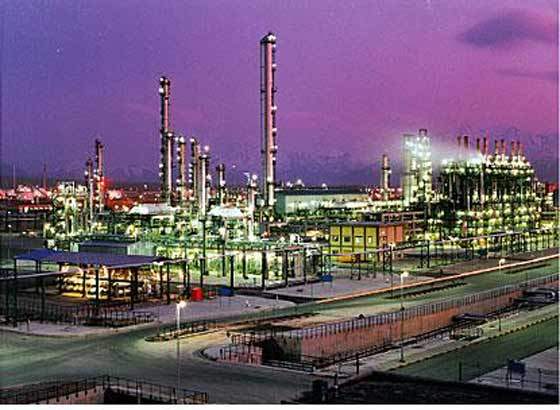 View of the Bandar Iman Plant

Iran is looking to expand its petrochemical capacity on an enormous scale. Under the multi-phase development programme, The National Petrochemical Company (NPC) plans that Iran’s capacity to make petrochemical intermediates and final products will grow from 9 million tonnes/year (mt/yr) in 2001, to 20mt/yr in 2005, to 27mt/yr in 2013.

Approximately 50% of the total petrochemical costs are in
hard currency which is invested through Engineering Procurement (EP) Contracts with foreign and Iranian contractors. This can be made available depending on the type of project and project contract. Around 85% of EP contracts price’s cover financing arrangements with international financial resources and the remianing 15% from NPC’s own resources.

The Olefins 8 will be based around a new 1.25mt/yr plant erected at the Bandar Imam complex by Linde AG, which is currently under review. JV Investment is currently in discussion with Shell to discuss the finances for the Olefin 8. The cost of the Olefins 8 project is expected to be in the region of $500 million. Linde also won a contract for a 525,000t/yr plant in 1999. It will also include the 268,000t/yr facilities for ethylene oxide and ethylene glycol. These have been held over from the Olefins 6 & 7 projects. The plant will be completed in 2003.

The production figures see the total polyethylene capacity of the Olefin 6 as 440,000t/y, which includes 140,000t/y HDPE and 300,000t/y LLDPE. The Olefin 7 site’s total polyethylene capacity is 600,000t/y, including 300,000t/y HDPE and 300,000kt/y LDPE. The plant is a joint venture between Elenac GmbH (55%) and the NPC (45%). The plant will use Elenac’s Lupotech T technology. The letter of intent for the LDPE plant was signed in the last quarter of 1999. It is expected to be commissioned in 2004. The deal will allow the German company, hitherto restricted to Europe, to access the cheaper raw materials of the Middle East. Elenac is a consortium of BASF AG and Shell.

Another contract for a 140,000t/yr HDPE facility as part of the Olefin 6 complex in Bandar Imam was awarded to Krupp Uhde by Petrochemical Industries Development Management. The facility was 75% complete in November 2001, and should be in operation before 2003. It will also use technology from Hoechst. The NPC will also construct a 160,000t/yr facility for propylene. The NPC plant will be commissioned in 2001. Engineering services are to be provided by Tecnimont. Spheripol technology from Montell will be installed.

The NPC plant can expect competition from another plant close to Bandar Imam. An 80,000t/yr polypropylene facility is to be constructed near Bandar Imam by Mosavar. This was announced in January 2000, and is expected to come on line in 2002. The engineering contract for the plant has been awarded to Krupp Uhde. Targor’s Novolen technology will be installed.

The polyethylene terephthalate (PET) facility at Bandar Imam will cost in the region of $400 million. The plant will have a capacity of 235,000t/yr of pure-grade PET and 180,000t/yr of bottle-grade PET. The basic and detailed engineering-and-supply contract for the PET facility has been awarded to the Italian Noyvallesina and the Iranian Namvaran. The complex also includes a purified terephthalic acid (PTA) facility with a capacity of 350,000t/yr. Both plants are currently around 85% completed and should be in operation by mid-2002.

The project is divided into five phases. Phases 1 and 2 comprise 10 projects due for completion by 2002. These units have a total capacity of 5.3 million tonnes/year of final products. The first two phases might require $3.5 billion of finance.

The six units that make up Phase 3 of NPC’s development programme will have capacity to produce 4.3 million tonnes per year of intermediates and 6.9t/yr of final products. The Phase-3 units are tentatively slated for start-up in 2001-05. Targeted for operation in 2004 are the Olefin 7,9 and 10 complexes, the 4th Aromatic plant and the 4th Methanol plant. The third phase could demand as much as $7.2 billion of investment. Half of this is expected to go to engineering and services.

NPC has outlined Phases 4 and 5 of its expansion programme, which encompass the periods 2005-09 and 2009-13, respectively. Phase 4 covers five projects in the region with ten different final products and should provide up to 3.6mt/yr of added capacity production. These phases together will increase NPC’s final product capacity by a combined 5.4mt/yr.

Iran is well placed to develop a petrochemical industry, because it has ample oil and gas reserves. In the past, it has largely relied on raw material exports. However, like many Middle Eastern producers, it wants to move downstream in order to exploit more value-added, less commoditised exports. This strategy was given an extra urgency by the low oil prices through most of 1999, although the recovery in the latter part of the year and early 2000 relieved the pressure

Almost half of the country’s petrochemical output is exported. The most important markets are the Far East (especially China and India) and Europe. Thus, the industry provides a welcome source of hard currency for the country. The vast capital needed to fulfil the Iranian government’s ambitious plans for the local petrochemical industry can only be achieved with foreign help. International companies are required for both technology and as partners in raising equity and loans.

Iran’s poor relationship with the USA raises a difficulty. The US government has passed an act imposing sanctions on companies that invest more than $20 million in the petrochemical industry in Iran. This has not yet been implemented as it is regarded as unacceptable by many of the USA’s allies. It nevertheless makes it harder for companies to raise money for Iranian projects.

Therefore Iran has gone to great lengths to attract foreign investment by upgrading its infrastructure, allowing cheap access to feedstock and excise tax concessions. Furthermore, Iran sets no limits on the equity interest a foreign operator can own in a plant on Iranian soil. To encourage investment in the country’s petrochemical industry, a special economic zone has been created around Bandar Imam. The tax holidays available to petrochemical investors can be as long as nine years.