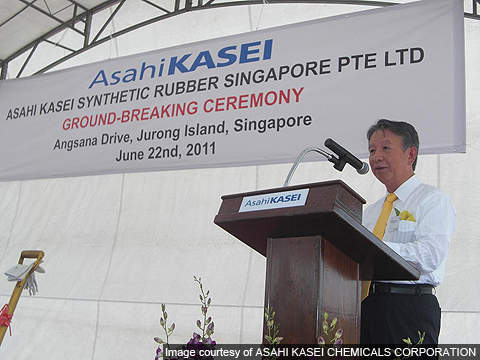 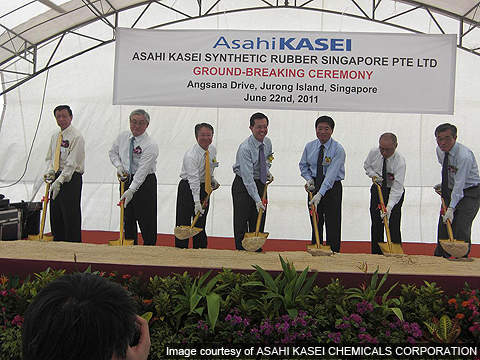 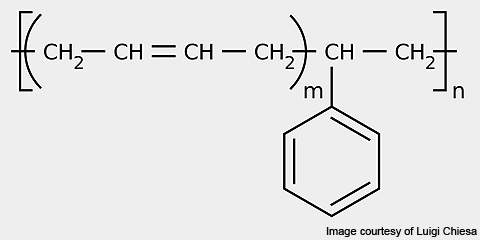 Structural formula of the styrene-butadiene-rubber. The copolymer consists of styrene and butadiene.

Japan-based Asahi Kasei Chemicals is constructing a new solution-polymerised styrene-butadiene rubber (S-SBR) production plant in Tembusu district, Jurong Island in Singapore. This is the second company plant on Jurong Island. S-SBR is a synthetic copolymer of butadiene and styrene. It is used for the production of high performance and fuel efficient vehicle tires.

Asahi Kasei Chemicals is a subsidiary of the chemical and materials science giant Asahi Kasei. The new plant will have capacity to produce 100,000t per annum of synthetic rubber. It is being built in two phases at an estimated cost of ¥20bn to ¥30bn ($253m to $380m).

The groundbreaking ceremony for phase I of the project was held in June 2011. Construction is scheduled for completion in May 2013.

The plant will come on-stream in June 2013. It will initially have capacity to produce about 50,000t S-SBR a year.

Phase II of the project will add another 50,000t per annum capacity at the site.

It is scheduled for completion in the first half of 2015.

The proprietary continuous polymerisation technology will produce rubber with high productivity and quality. The rubber is branded as tufdene.

This mixture is continuously removed from the reactor and sent to a finishing zone. The extracted co-polymerised SBR is then separated and dried to the finished product.

The front-end engineering and design (FEED) consultant for the S-SBR project was Asahi Kasei Engineering. The site preparation works were carried out by JTC.

The main contractor for the construction of SSBR production plant is Hitachi Plant Technologies with TTJ as sub-contractor. TTJ will be responsible for the structural steel works of the S-SBR factory.

Asahi Kasei Chemicals has two S-SBR production plants at Oita and Kawasaki in Japan. The combined capacity of the two plants is 140,000t/y. The decision to build a S-SBR factory in Singapore was announced in October 2010 as part of the company’s strategy to expand operations globally and become a stable supplier to cater to existing and future demands.

The Jurong Island site was chosen for the project due to the availability of raw materials and a skilled workforce.

The chemical cluster has petrochemical complexes of Petrochemical Corporation of Singapore (PCS) Shell, the feedstock supplier.

They are expected to start-up along with the Asahi Kasei plant in 2013.

Demand for silica compound tires has been increasing predominantly in European countries. The tyre segment is expected to grow rapidly in the Japanese and worldwide markets in the near future.

The tyre rubber production has shifted to the Asian market due to the expanding motorisation in these countries.

The demand for high performance tyres has also been increasing rapidly due to government regulations and environmental concerns. Asahi Kasei estimates the global demand for S-SBR to be 500,000t in 2011. The demand is expected to increase to 1.1 million tons by 2020.