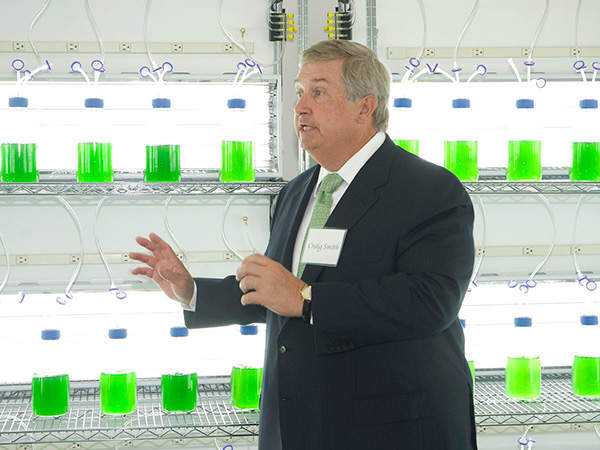 The pilot-scale integrated biorefinery will have a capacity to produce 100,000 gallons of ethanol per annum. Image courtesy of Algenol LLC. 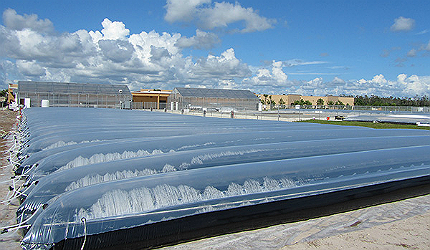 Algenol Biofuels is constructing an integrated algae-based pilot-scale biorefinery in Lee County, in the state of Florida in the US. The biorefinery is expected to produce about 100,000 gallons of fuel-grade ethanol a year. The plant was earlier planned to be located at Dow’s industrial site in Freeport, Texas. It was, however, relocated to Florida in 2010.

Algenol was founded in 2006. The new facility in Lee County brings together the company’s aquaculture, engineering, biological, research and production facilities in to a single site. The company plans to develop the hybrid algae process technology to a scale of about 6,000gal/yr of ethanol per acre.

Feedstock for the pilot-scale biorefinery

The process takes place in patented photobioreactors (PBR). The feeding of algae in salt water is expected to require about two dry tons of CO2 a day.

"The entire process is expected to result in an 80% smaller carbon footprint when compared to gasoline-based ethanol production."

The ethanol pilot plant is located on a 36-acre site at Fort Myers in south-west Florida. The facility consists of a saltwater well, 4,200 square feet greenhouse, 10,000 square feet ethanol processing and water pavilion and a 10,000 square feet operations support building. The facility will accommodate about 3,000 PBRs in a commercial module. The main component of the technology is the patented photobioreactor (PBR) made from flexible plastic film.

The biorefinery is based on Algenol Biofuels’ proprietary Direct to Ethanol algae technology. It will also have the proprietary membrane-based ethanol dehydration and advanced vapour compression steam stripper (VCSS) technology to yield high concentrations of the fuel product. The downstream ethanol separation is done through membranes or distillation processes to make it suitable for transportation.

The entire process is expected to result in an 80% smaller carbon footprint when compared to gasoline-based ethanol production.

Direct to Ethanol process at the Lee County facility

"About $90m was raised from private institutes by 2011 to start the construction of the refinery."

The algae convert pyruvate into ethanol. Pyruvate is produced from CO2 and salt water by the process of photosynthesis. Sunlight is the main source to start the product separation from the PBRs.

The volatile ethanol molecule from each cell of the saltwater culture diffuses with an increase in the daylight temperature. With decreases in the external temperature, condensed ethanol from the top of the sealed photobioreactor is collected through special troughs. The process is considered unique as it does not kill or harvest the algae unlike other algae-based processes.

Algenol has about 2,300 strains of algae. It is also working to increase the efficiency of the strains to enhance the chemicals output.

The National Renewable Energy Laboratory (NREL) provided the biomass disposition and LCA support and evaluation of industrial CO2 sources. Other collaborators for the project include The University of Colorado, Membrane Technology and Research (MTR) and Valero Energy Services.

The US Department of Energy (DOE) provided a $25m grant to Algenol towards the development of the pilot-scale integrated biorefinery, in 2009. Lee County’s Economic Development Committee also allocated a $10m grant in 2010. About $90m was raised from private institutes by 2011 to start the construction of the refinery.

GCM Contracting Solutions is the general contractor for the construction. The same contractor had also built the research and development complex.