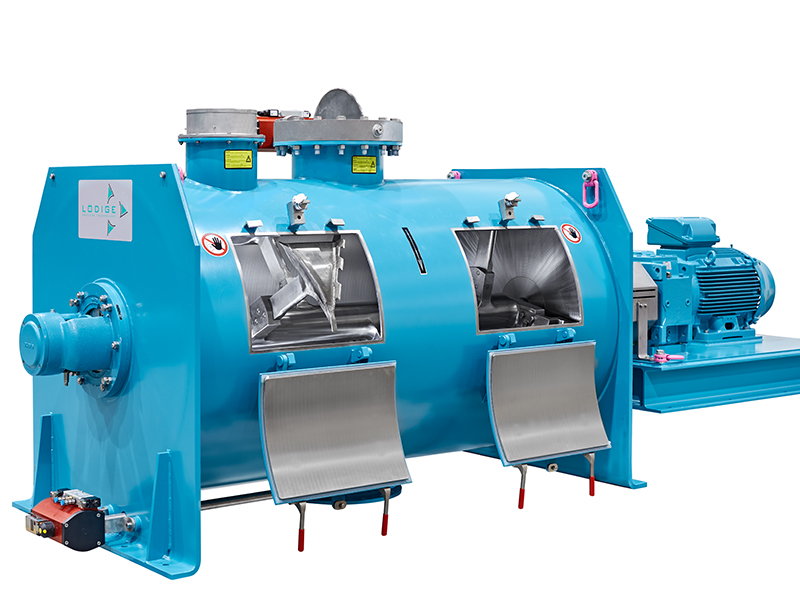 Ploughshare® Mixer systems have proven themselves in the chemical industry. For many decades these machines have been successfully employed for mixing, granulating and drying high-quality chemical products.

The advantages of a horizontal Ploughshare® Mixer lie in the short mixing time – usually between two and three minutes – with the highest mixing precision in the 1:100,000 range and higher for many products. This is enabled by a fluid bed created by the mixing elements and thus mechanically generated. By using a constant Froude number, which is an indicator of product movement in the machine, test results or validated processes can be reliably transferred from one mixer size to another. By virtue of its horizontal design, the Ploughshare® Mixer requires significantly less drive power and a reduced construction height compared to conventional, vertical high-shear mixers.

Besides usage as a mixing system, the Ploughshare® Mixer can also be employed for granulation processes. A granulation agent can be introduced to the fluid bed by a number of different methods. The interaction of product particles, mixing elements and mixing drum, together with the resulting shear forces, causes granules to form. The results achieved are absolutely comparable with those of vertical high-shear mixers. The desired granule size can be set with the aid of one or more rapidly rotating choppers which break up any lumps. Optional discharge through an integral sieve mill for final size calibration of the moist granules completes the process engineering possibilities of this system.

Classic applications for a Ploughshare® Mixer are: