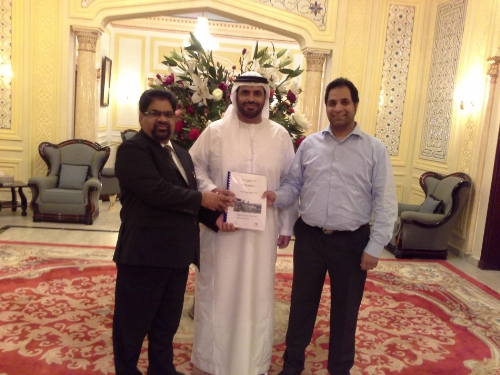 Nuberg Engineering has secured an EPC contract worth Rs10bn ($152m) with Al Ghaith Industries to develop a chemical complex in Abu Dhabi.

In the first phase, the Indian company will set up 350t per day (TPD) caustic soda and 60TPD hydrogen peroxide plants at the Khalifa Industrial Zone (Kizad).

Al Ghaith Industries chairman Ali Hamel said: "This major project is a leap of growth towards becoming the pivotal catalyst for the Chlor Alkali industry in the MENA (Middle East North Africa) region.

"It will enable us to become the leader in catering to the increased demand for caustic soda in the Middle East and Africa as well as create new market opportunities."

"This major project is a leap of growth towards becoming the pivotal catalyst for the Chlor Alkali industry in the MENA region."

The new complex is the fourth being built by Nuberg for Al Ghaith.

The first involved the establishment of a 140TPD capacity plant, expected to be commissioned in September.

The second, signed in October 2014, was also for a plant with similar capacity.

The company plans to construct and export the majority of the equipment for the project from its 115,000m² manufacturing facility in Jhagadia near Ankeleshwar in the Indian state of Gujarat.

Global EPC, fabrication and project management company Nuberg has, so far, set up more than 40 greenfield chemical plants in over 30 countries.