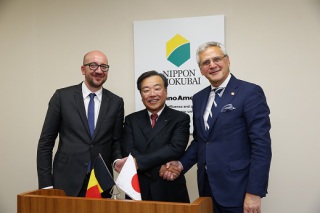 Nippon Shokubai has confirmed plans to expand production of superabsorbent polymer (SAP) and build an acrylic acid plant in Belgium with an investment of €350m.

Planned to be located at the company’s headquarter site in Antwerp, the new facility will add 100,000t a year to Nippon Shokubai’s current SAP capacity of 60,000t at the complex.

Mechanical completion of the projects is expected to be complete in October 2017 with plans to begin commercial operation in May 2018.

The latest investment will allow the company to ensure stable supply of SAP and its main raw material acrylic acid.

One of the company’s core businesses, SAP is a key material that is used in disposable diapers, and shows steady growth of demand.

Nippon Shokubai is already working on a SAP production facility in Himeji, Hyogo Prefecture in Japan.

Based on its long-term business plan, ‘Reborn Nippon Shokubai 2020’, the company finalised investment in Belgium.

Nippon Shokubai said that the project in Belgium will have no impact on current fiscal year ending 31 March 2016.