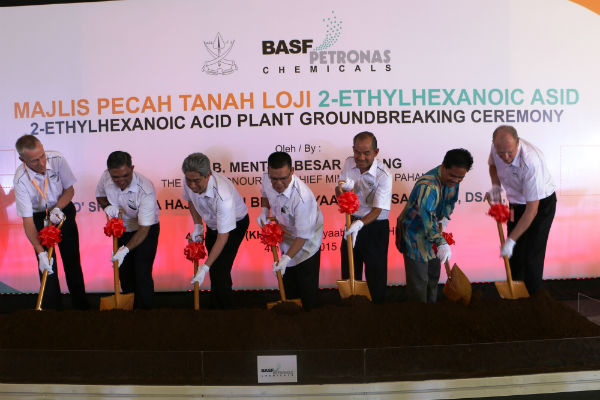 BASF Petronas Chemicals has started construction on a new 2-ethylhexanoic acid (2-EHAcid) facility at its production site at Kuantan, Malaysia.

The company, which was established in 1997, is a 60-40 joint-venture between BASF and Petronas.

The new 2-EHAcid plant, which is expected to start operations in the fourth quarter of 2016, is situated in one of the two Verbund sites within Asia Pacific.

It has a total annual capacity of 30,000t. The plant offers an opportunity for backward integration to utilise raw materials, energy and technology.

BASF said 2-EHAcid is a chemical intermediate used as a compound in the manufacture of synthetic lubricants as well as oil additives.

"The plant offers an opportunity for backward integration to utilise raw materials, energy and technology."

It is also utilised for functional fluids such as automotive coolants, metal salts for paint dryers, plasticisers, stabilisers, catalysts and other applications in several industries.

BASF Petronas Chemicals is also building an Aroma Ingredients facility, which is expected to be commissioned in late 2016, to produce citral, citronellol and L-Menthol.

The range of chemicals produced by the company currently meets the increasing demand in multiple industries, including fabric, plastics, adhesives, lacquers, dyestuff, automobile and industrial coatings.