Bran+Luebbe has been a worldwide leader in metering, analyzing and processing liquids for more than 75 years. The name Bran+Luebbe stands for high quality and precision, as one of the world’s most reputable manufacturers of metering and process pumps, process systems and analyzing equipment.

We have the highest quality standards, pioneering innovations, and comprehensive process and applications know-how in the industry. Our extensive line of metering pumps, process pumps, process systems, chemical injection systems and analyzers is designed to exceed your expectations when it comes to efficient metering, processing and analyzing.

Bran+Luebbe is one of the many brands that comprises the SPX Flow Technology segment. These brands design, manufacture and market solutions and products used to process, blend, meter and transport fluids, as well as air and gas filtration and dehydration products, serving sanitary, biopharmaceutical, chemical, marine, oil and gas, power, industrial and municipal markets worldwide.

NOVAPLEX integral pumps are powerful process diaphragm pumps for a variety of applications. They are best suited to critical high-pressure installations. Additionally, they can be used when the capability of classical metering pumps is exceeded.

NOVAPLEX integral pumps are ideal for toxic or chemically aggressive liquids, and for slurries / suspensions with particle sizes up to 100µm. Typical industrial fields include chemical and petrochemical, oil and gas, pharmaceutical and food.

The diaphragm pump heads of NOVAPLEX integral pumps utilize the principle of hydraulic actuation of diaphragms. The plunger movement induced by the crank gear acts on the hydraulic fluid rather than the process fluid directly. The hydraulic fluid in turn displaces a freely moving diaphragm. This diaphragm acts as a hermetic seal that separates the hydraulic fluid from the pumped liquid. There are no dynamic seals between the liquid and environment, which makes securing zero leakage much easier.

The Bran+Luebbe positive diaphragm position control (PDPC) system ensures that the diaphragm cannot be damaged even under critical conditions such as a blocked pipe or closed valves on both suction or discharge side.

A pressure relief valve within the hydraulic system of the pump head not only protects the pump head but also the pump gear from overload due to excessive pressure. This protection system allows clean liquids of low to high viscosity as well as dirty fluids and all types of suspensions to be pumped safely. Furthermore, the integrated air bleed valve ‘bleeds’ out a small amount of hydraulic fluid and entrapped air with each pumping stroke from the hydraulic chamber, thus ensuring high metering accuracy and reproducibility.

The diaphragm condition monitoring system is based on pressure measurement. A thin circular disc with a capillary system is positioned between the two diaphragms and connects the evacuated interstitial space with the monitoring system. Should either one of the diaphragms be ruptured, the pressure in the interstitial space and the capillary rises. It can be signalled externally by a variety of optional indicating devices such as pressure gauges, pressure switches or pressure sensors. 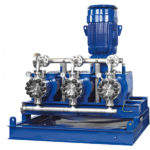 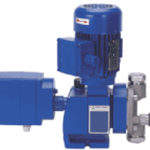 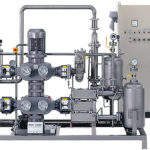 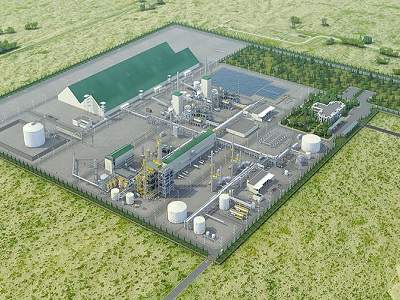