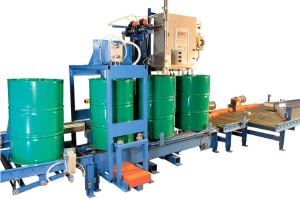 A major coatings manufacturer needed an automatic filler to fill 55gal drums with a flammable coating product. The idea was to keep an operator away from the filling station and to allow a steady pace of filled drums throughout a two-shift process. The rate was one drum every 75s, because of foaming and high-viscosity.

The customer had two additional problems that could not be met by other filling manufacturers they had already contacted. The filling system had to fit into a room with a 12ft ceiling. Since a large percentage of liquids were foaming products, a sub-surface filler was necessary. Typically a sub-surface filler requires 13ft ceiling clearance. The other condition was limited floor space for filled drums to accumulate prior to fork-truck pick up.

Specialty Equipment solved the problem by providing the customer with a custom-made, automatic, sub-surface filler that would max out at slightly less than twelve feet tall when fully retracted. The horizontal space problem was solved by accumulating filled drums in parallel lanes.

The operation was designed as a straight-line configuration where empty drums, with bungs previously removed, accumulated to an air-operated escapement. When a drum was called, the escapement retracts and an air-operated bar drops down between the first and second drum, pulling the drum into the rotator station.

Every drum is rotated to find and lock-in the bung position. Upon arrival, on a twin-strand chain conveyor, the drum is raised by four skewed rollers. A cradle of wheels and a powered pneumatic tire move into position on each side to capture and center the drum. The drum is automatically rotated while a sensor locates the bung.

After rotation, each drum is conveyed to the fill station then signals its arrival. The filler’s 1,000lb brick scale is raised between the chains, lifting the drum. A signal is then sent to start the fill cycle. An Allen Bradley PLC controller with touch screen, in a NEMA 4X nitrogen-purged panel, was also part of the filler package.

A powered roller conveyor receives the filled drum at the bung station, outside the filling room. Upon discharge, each full drum conveys past a mechanical wig-wag diverter which sends drums onto twin gravity accumulation conveyors. Drums convey left then right then left and right, until fully accumulated. A fork truck picks up four drums at a time from the side of the accumulation line. All the equipment was built and tested at the Specialty Equipment plant in Houston, Texas.