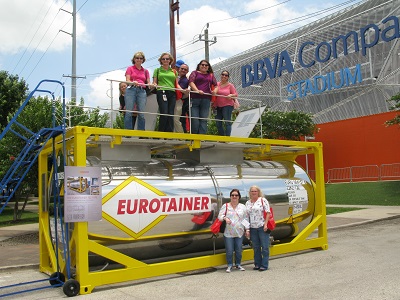 The Technical Day was held at the BBVA Compass Stadium which is the home of Houston’s major league football (soccer) team.

Just more than 100 people attended from 22 different companies. The attendees came from customers, suppliers and prospect accounts visiting from as far as Mexico and France.

Eurotainer held several educational sessions that provided the attendees information on regulations, valves and connections, gasketing and a general introduction into the use of tank containers. Several different types of tank containers were on display outside of the stadium and the attendees had a the opportunity to explore the equipment and ask questions about their use.

During this event, Eurotainer also provided the opportunity for those attending to meet strategic suppliers and review their products.