Vichem has been doing business within the chemical and petrochemical industries for over 60 years. We have an international team and have developed an extensive knowledge of units for industrial waste treatment and pollution control, as well as plants for the production and purification of phosphoric acid and phosphate fertilizers.

Vichem has the engineering expertise to supply turnkey systems, design studies, crucial equipment and assistance for start-up and commissioning to clients. Our full range of services includes consulting, expertise, on-site audits, inspection, maintenance, training, retrofitting and de-bottlenecking, both for new plants or upgrade of existing ones.

We have developed and patented a specific low dioxin, low NOx burner for such applications: the Pulvaporizator®. This is a revolutionary design of oxidizer which atomizes and vaporizes waste in one single step. Independent tests, performed on site, have proven that this unique thermal oxidation system enables destruction and removal efficiency (DRE) of more than 99.9999%, with stack emissions well within environmental norms. Also, dioxins levels are lower than 0.005ng/Nm³.

Our units allow most often for thermal energy recovery through the production of steam, and recycling of compounds such as hydrochloric acid solution, pure anhydrous HCl gas, or fluorohydric acid.

The Pulvaporizator is well-suited to applications such as:

Vichem offers a complete phosphoric acid plant including engineering, purchasing, and commissioning. In a context of diminishing availability of high-quality phosphate rock, and its increasing price, Vichem has developed and patented a process which provides a significant improvement on the attack process on phosphate rock by sulphuric acid, in accordance with the dihydrate process.

The process consists of two successive sets of reactors-separators. In the first reactor, approximately two thirds of the tricalcic phosphate rock capacity is attacked with sulphuric acid. In the second reactor, the remaining one third of the tricalcic phosphate rock is attacked with the corresponding amount of sulphuric acid, mixed with the amount of phosphoric acid produced in the first reactor. The final phosphoric acid is therefore produced in the second reactor. The final gypsum (CaSO4, 2 H2O) is recovered in the first separator.

The process provides an increase of up to 50% in capacity by adding one additional reactor with cooling system and one belt filter under equipment. The construction and installation of the new equipment do not require the shutdown of the existing unit.

Not only that, but the stability of the process is ensured thanks to the two reactor-filter sets, even if the concentration in the phosphate rock changes. For revamping and de-bottlenecking of plants, it is easy to add a reactor-separator couple in an existing process in order to simultaneously increase the capacity and the profitability of the production unit. 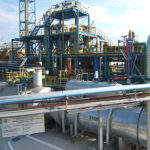 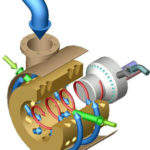 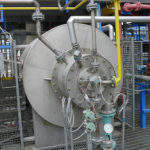 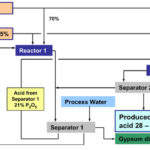 In April Vichem will be presenting an exhibition booth during the Eurochlor conference and exhibition in Budapest, Hungary. Based in Brussels, Eurochlor is an association federating 97% of chlor-alkali producers in the EU-27 and EFTA regions. The federation is a key link between in